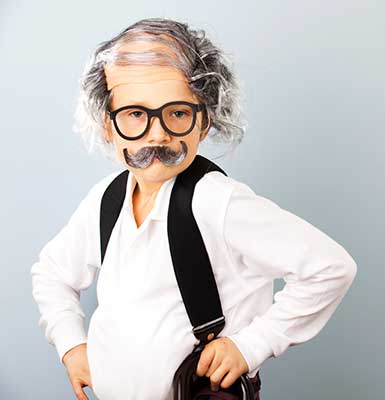 “”Maturity is a bitter disappointment for which no remedy exists, unless laughter can be said to remedy anything.”
Kurt Vonnegut, Jr.

I view the state of maturity as relative, relative to me, that is. In my arrogance, I consider myself the epitome of maturity. Those individuals younger than me can only aspire to ascend to my level. Those who are older, poor things, must surely be in decline. Strangely, this view is static?it does not alter as I do. I am always the benchmark of maturity, against which all others are judged. (This includes, I confess, my younger self whose maturity level when viewed today seems occasionally cringe-worthy.)

Before enrolling at Athabasca University I was accepted as a full-time mature student at a bricks and mortar university. I had misgivings about attending, not the least of which was that I was decades older than most of the other students. There was also the matter of distance, as I live quite a stretch from the nearest university town, and the concern that full-time studies would interfere with my semi-retired lifestyle.

Yet on student orientation day in August, I went to join my future classmates. I found myself, lined and grey and withered, navigating a sea of first-year students, fresh and buoyant and loud. Trying to blend in, I scampered after the leader of the campus tour while the other students surely thought I ought to be in the parents’ group. Later on, I tried to strike up conversations with other students while they studiously avoided eye contact. Only parents, I found, felt comfortable talking with me.

Despite that particular university’s claim that they accept a large number of mature students, I sensed their notion of maturity was quite different from mine. To me, as noted earlier, mature means very close to my mental and physical age. It means someone who has worked for decades, raised children, is widely-read, and well-travelled. To institutes of higher learning it can simply mean a student who has not gone directly from high school to university.

By that definition, a student in their early twenties is mature. And, relative to an 18-year-old, they are. But relative to someone who has nearly hit the half-century mark?not so much. For example, my 25-year-old son was recently accepted as a mature student at another university. Given that he previously loafed through several years of studies, squandering tens of thousands of dollars (mine, not his) with little to show for it, I question this interpretation of maturity. How can 20-somethings be thought of as mature? Are they not just starting out on the long, wearying road to maturity?

And so, that orientation day, I felt my enthusiasm waning. Although learning in a classroom setting appealed to me, was this going to be worth it? I had envisioned being stimulated by lively discussions and insightful questions. This was still possible but I worried about the downside of being surrounded by the young and inexperienced. Perhaps those unseasoned, tech-savvy youths look to the future and see limitless opportunity. I look ahead and see a fast-approaching horizon. Finding common ground seemed unlikely. Would I just feel impatient waiting for classmates to catch up? Or worse, would they show me up? It was an unpalatable thought.

It was time for a re-evaluation. I had initially dismissed distance learning as being under-engaging and lacking in stimulation. And so it can be, but not to the extent I feared. Arguably, the engagement level is increased simply by having to work harder at comprehension. I have found what it lacks in lively classroom discussion it makes up for in sheer convenience. I can thumb my nose at weather forecasts and traffic reports. I can take off for an out-of-town visit with little regard to a fixed schedule. I can bake a cake while I write an essay.

Most importantly, in my classroom of one, I can smugly bask in unchallenged maturity. I neither have to suffer the perceived vacuity of youth nor the tiresome wisdom of elders. And I certainly don’t have uncomfortable reminders of my long-ago younger self nor my rapidly-approaching horizon.