Columns
The Voice
Gregor’s Bed – A Playlist Without Borders 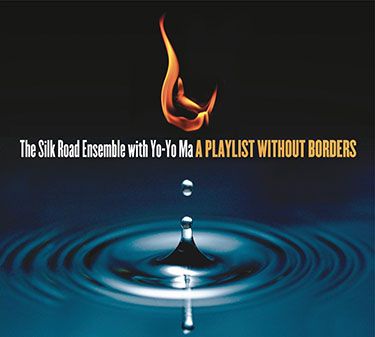 Album: A Playlist Without Borders

The new electronic independence re-creates the world in the image of a global village.
-Marshall McLuhan

Does the state of the world today sometimes get you down? Does the quest for world peace look more and more like a dark tunnel sparked with only phantom gleams? Is global awareness sucking all the joy out of your life? If the answer to any of these is yes, you need to hear this album.

Before you rebut that It’s just music and won’t solve anything, ask yourself if there’s any point in sitting around moping about situations you can’t control. Sure, do all you can to live in harmony with humanity and to compel your leaders to work toward peace. Then listen to this album.

This is the fifth album?and the 15-year anniversary album?of The Silk Road Ensemble, a 60-odd member musicians? collective from 24 different countries. It seems that for the musician of the future, being in ?a? band is a bit passé; each of these musicians and composers is involved in a number of projects and each project seems engaged in the same intent: to root an aesthetic in a global consciousness without compromising the integrity of ethnic musical traditions. It’s a prime example of a mission that could be summed up as using the creative stimulus of intercultural artistic dialogue to bring in a brave new world. And they’ve pretty much done that.

The sheer joy that this motley?and very spread out?crew of international artists clearly experiences in working up superlative compositions and performances is infectious, and the aural dishes are a savoury mélange of old and new.

The album starts out with a series of tracks called ?Playlist for an Extreme Occasion,? composed by Vijay Iyer, a multi-talented pianist composer of Tamil origin but born and raised in New York. This playlist-within-a-playlist takes turns between spirited and vibrant, dissonant, and delicate. The title is a reference to a statement by famous literary theorist Edward W. Said, who said that in a classical performance there are ?extreme occasions? in which music is written and performed with rare excellence.

Iyer says he used a kind of open-ended composition style for these tracks; he abstained from imposing a story on his work but rather provided a series of elements that the musicians could develop and fit together to create their own narrative. This seems to be an important characteristic of the new musical syncretism: composers allowing musicians to take improvisation to a new level of expression by freeing them to interpret compositions according to their own traditions and sensibilities.

The four parts in ?Cut the Rug,? written by David Bruce, are high points, too. The exuberant ?Drag the Goat? is a reference to the Central Asian horseback game called Buzkashi, wherein horseback riders punt around a headless goat carcass.

This album is a kind of historical showcase of the state of serious music today. It appears that composers are now eagerly exploring not only different traditions, but the expressive potential of traditional instruments like the pipa, shakuhachi, jang-go, tabla, gaita, and sheng.

We must also give a nod to Mr. Ma for spearheading this project. This formidable musician is a gift to the globe, not just because of his superlative musicianship, but because of a worldview informed by the liberal tradition. (Skirting the error of focusing all his time and strength on music alone, he pursued a traditional liberal arts education, graduating from Harvard University in 1976.) Truly a flower of humanity. May humanity be grateful.