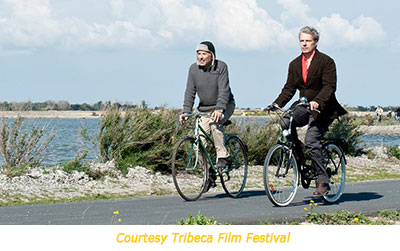 “He who is unable to live in society, or who has no need because he is sufficient for himself, must be either a beast or a god.”
– Aristotle

Gauthier is a handsome theatre actor whose claim to fame is a cheesy role as a doctor in a television drama. He’s travelled to the île de Ré to try to convince an old colleague, Serge, to perform in a production of Moliére’s play, The Misanthrope, that he’s staging so that he can finally get the chance to play the main character, Alceste. He wants his friend to take the part of Philinte, Alceste’s friend and the calm voice of civility in the play. However, Serge insists that he should be the one playing Alceste. Much bellyaching ensues until they finally agree to take turns playing Philinte and Alceste on different nights during the play’s run.

At this point we must say something about The Misanthrope. Watching a dramatic work that has been inspired by another dramatic work is something like standing between two mirrors and looking back and forth to see how each mirror interprets the infinite repetition of your face and the back of your head. In this case, the play illuminates not only the characters of Serge and Gauthier, but also the profession of acting and, in particular, the kind of person who becomes an actor.

“Oh, no”, the two men insist. “You can’t leave without first reading a little from the play!”

Finally, she relents and they hand her some lines from the part of the flirt Célimène. We shudder and wait for the crash and burn. It’s as bad as you’d expect; she reads the lines as if she were in grade school: haltingly, without feeling. Then something strange happens. As the lines become more emotionally intense, she pulls herself up, begins to make eye contact with her audience, and expresses the lines with an authentic tenderness and a charming fluidity. The two seasoned actors stare at her, dumbfounded.

The character Alceste despises humanity and yet obviously hopes to be loved, admired, and appreciated by human beings. This is very much the character of Serge in the film (which may be why he so desperately longs to play the role) while Gauthier is really much more like the character’s buddy Philinte?he even has a hard time properly saying a line about hating human beings.

Through most of the story, Serge and Gauthier are locked in a battle that boils down to who gets the love and admiration. The only thing that works, that gives them a temporary respite from the hellishness of their own relationship, is the age-old, time-honoured process of repentance and forgiveness.

After Serge apologises for mocking and patronizing Gauthier’s television role, Gauthier forgives him wholeheartedly and the men enter a period of childish delight, creativity, deepening friendship, joy, and even good acting. It’s during this part of the story that we see them flying along on bicycles?joyously racing each other like small boys.

But, oh, how the ego can make a mess of things. When Gauthier wrongs Serge and apologises, everything changes. Serge quickly assumes power and relentlessly executes his revenge. Their halcyon days are over.

In the end, Serge is alone on the beach, once again like Alceste, proclaiming his hatred of humanity and assuming his solitude to be a triumphant one?but all the viewer can feel for him is pity. The thing in which he had taken such pride?his prowess as an actor?is now done and over with. The same is true for Gauthier. Sometimes the conditions for artistic excellence involve traditional values that really can’t be transcended just because you think You’re fabulous.

Cycling With Molière manifests six of the Mindful Bard’s criteria for films well worth seeing.

It’s authentic, original, and delightful; it poses and admirably responds to questions that have a direct bearing on my view of existence; it stimulates my mind; it provides respite from a sick and cruel world, a respite enabling me to renew myself for a return to mindful artistic endeavor; it is about attainment of the true self; and it makes me appreciate that life is a complex and rare phenomena, making living a unique opportunity.