Columns
The Voice
Primal Numbers – A Step Too Far

Not so long ago, there was only one way for the average person to track how far they walked each day. It involved a pedometer, a pencil, and a notebook. Now, there are dozens of personal fitness apps that will record every moment of your fitness efforts, from sleep patterns to urine analysis. But as the latest tech tracks our data, can we really trust the companies who compile it?or have we taken things a step too far?

Wearable fitness trackers are all the rage, with no fewer than 26 gadgets rated on this recent Time review list. And It’s no surprise these handy little devices are getting popular. they’re cool, fun, and packed with some very advanced features that can help people get, and keep, their health and fitness goals on track.

To take just one example, the Jawbone Up is a wearable tracker designed to be worn 24 hours a day. It’s a ?system that tracks how you sleep, move and eat,? and users can manually log workouts, food, and even their mood. Like most other wearable trackers, the Up has an app that syncs with the device. Enter your data or let the device log it for you, and personal statistics, including things like your heart rate, can be synced to the company’s servers.

Sharing such personal metrics might seem like a natural next step in a world where Google already tracks every mouse click we make, and where web browsers show us ads based on sites we visited just moments ago. But It’s one thing if corporations know which Pinterest sites we like. It’s quite another if colleges and insurance companies get their hands on our health status?and That’s a very real possibility.

If anyone’s got their pulse on the state of trackers and health data, It’s someone like Florian Gschwandtner, the CEO and co-founder of Runtastic. As he notes in this Huffington Post interview, ?many sleep and nutrition tracking companies are already trying to sell their data to major clinics and labs, while universities and insurance companies are requesting data from app and hardware companies.?

For the sake of argument, let’s assume that buried somewhere in the fine print of a site or app agreement is a clause that lets them sell your data to a third party. You’ve agreed to it, but is that really such a good idea?

Think, for a moment, of all the places that could use your health data in ways you might not like. Insurance companies, who could justify raising premiums based on demographics. Even if those reams of app data are anonymized, with no specific user’s name attached, what if thousands of people in a particular province or city upload data that shows they have poor sleep patterns and exercise habits? Just as some drivers pay higher premiums based on where they live, companies will no doubt pore over health-tracker data to see which areas carry the highest risk.

The same could happen with university admissions. Will some schools, especially those with sports teams, prefer applicants who come from the areas that report higher levels of fitness and better sleep habits? And what about employers?

Obviously, demographic data is nothing new. Governments and corporations have been analyzing population trends for decades. What is new, though, is the highly detailed?and highly personal?nature of the information that fitness trackers allow us to feed them.

You could, of course, use a fitness tracker to get immediate feedback but choose not to sync or compile your data. But that takes away a lot of the incentive for using them in the first place: the social networking and support of sharing data with other users, and the ability to track your progress over time.

Still, I’m not sure I’m ready to share the details of my sleep, heart rate, and meal choices with a fitness tracker?especially when I don’t know where that data might end up. For now, I think I’ll clip on my old-fashioned pedometer and take a long walk to think about it. 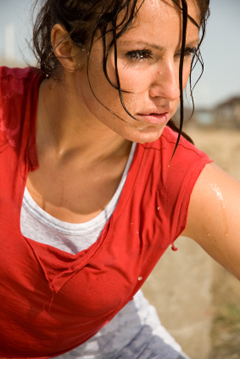