Articles
The Voice
Maple Syrup in One Easy Step 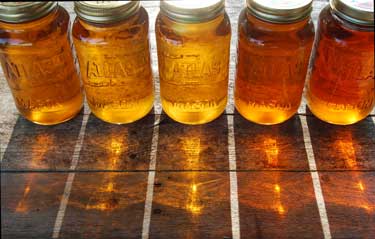 For those fond of maple syrup, the simplest way to get it is to buy it. It takes only moments, but may set you back more than what you’d pay for a nice scotch. Some Canadians, however, are fortunate to live in the major maple-syrup producing areas of Ontario and Quebec. Those maple syrup lovers have an additional option: find someone who makes their own and get on their Christmas list.

We make our own maple syrup (forget it, our Christmas list is full) and I can tell you how to make it in one easy step: Take a large quantity of maple sap and boil it down to 2.5% of its original volume. That’s it. Serve on pancakes and enjoy.

Okay, it’s a bit more involved than that. Maple syrup is a labour-intensive product. The process is at the whim of the weather and can’t be rushed. These days, other syrup producers use expensive and efficient equipment to speed the evaporation process, but we still make syrup the traditional way?outdoors over a wood fire.

Step 1?Tap the trees
After weeks of watching weather conditions and forecasts, we determine, or rather guess, the optimal time to tap. Ideally, we want to set the taps just before the beginning of a period in which the daytime temperatures consistently rise above freezing and the night-time temperatures consistently drop below. We drill a small hole in each maple tree about two feet from the ground (digging through snow when necessary) and then gently tap a spile into the hole. We’ve modified our spiles, adding a short piece of tubing and wire, to accommodate our unconventional collection method.

Step 2?Collect the sap
Traditionally, maple sap is collected in buckets hung on the spiles, but we use bags. Our maple bush is on a woodland property hundreds of kilometres away from our home, so we don’t have the opportunity to collect sap daily. We fasten food-grade plastic bags to the spiles with wire. The bags, protected by a strong supporting outer bag, can hold a couple dozen litres of sap. Back at home, we monitor weather conditions online and judge when the time is right to collect and boil. Then it’s back to the maple bush, to gather the sap, transfer it from the bags to large bins, and carefully slide the bins down the snowy hill to the sugar shack.

Step 3?Begin the boil
We set up an outdoor sugar shack?a three-walled structure with a simple boiling stove. Our wood-fired stove is two halves of a metal drum, split vertically down the centre and laid horizontally, like an opened clam shell, on concrete blocks. We build a wood fire in the drum halves, and place the four boiling pans on top. Each pan represents a different stage in the evaporation process?from raw sap (pan 1) to finished syrup (pan 4.)

Step 4?Boil and evaporate
As the sap heats and boils, the water content steams away. There is a lot of steam produced, which is why our sugar shack has an open wall and an angled roof. The steam is why you should not try boiling sap in your kitchen?everything will get covered with steam, which dries to a sticky mess. We transfer the thickening sap from pan to pan, filtering it at each step. From raw sap to finished syrup takes about 6 hours of boiling. Each litre of sap will yield less than 2 tablespoons of syrup.

Step 5?Watch and test
We watch the final pan, called the boil-off pan, very closely. As it nears the critical point, it froths rather than bubbles. Some syrup producers rely on thermometers but we rely on 30 years experience. When the syrup drips thickly off a ladle in a “w” shape, it’s time to take the pan off.

Step 6?Pour into jars
We handle the finished syrup quickly. We filter it one last time then pour it into sterilized jars. Each batch yields one to three jars; we’ll boil off batches every couple hours over the course of several days. The shack becomes our daytime home and we cook our meals over the fire. Only at night do we retire to our heated trailer for a brief rest.

By the end of three or four days, the spring temperatures are rising and the snow is melting into mush and mud. We drag our precious golden cargo on sleds to our vehicle. After washing all the equipment, we steam ourselves clean in an invigorating sauna. Syrup-making in an exhausting process, and every year we pledge “this is the last year.” And every year, the smell of spring in the air brings a longing.