Smart phones are seductive little gadgets, aren’t they? In fact, it can be hard to tear your eyes away from the screen, even when You’re walking or driving. Now some tech giants have come up with transparent texting, which fills your screen with a view of what’s in front of you. It’s an idea whose time should never have come.

According to a recent CBC blog post, the technology works like this: it activates the rear-facing camera on your device, ?displaying what’s in front of a Smart phone user as live video in the background of whichever app they’re using?as if the phone were transparent.? Apple has reportedly filed a patent on the technology, though users can already find a similar app called Type n Walk in the iTunes store.

It might seem like a solution in search of a problem, until you consider that texting and walking has become such a danger that some cities have created laws to deal with it. This ABC News video reveals that the town of Fort Lee, New Jersey, has started handing out tickets for texting while jaywalking, and authorities in London, England, have padded some lampposts to prevent text-walking injuries. And as the Los Angeles Times reported, over 1,500 pedestrians in the US ?were treated in emergency rooms in 2011 after being injured while using a portable electronic device like a cellphone.?

Is transparent texting the solution? No, and it might make things worse by giving people a false sense of security.

The problem isn’t texting. Nor is it walking. Most people can do one or the other with ease. The problem is that the human brain can only focus well on one task at a time. And whether You’re monitoring your environment through a screen or not, transparent texting would still require you to divide your attention between composing a text and watching out for cars and lampposts.

Even worse, tech that encourages users to multitask could hamper their ability to focus at all. As Time reports, a 2009 Stanford study found that ?even when they focus on a single activity, frequent multitaskers use their brains less effectively.?

Rather than finding ways to encourage the text-walking habit, why not use technology to prevent it? For instance, plenty of smart phones now have pedometers built in. It wouldn’t be that difficult to link the technology to a phone’s text capability. If it senses walking, the text function won’t work. Even in more basic phones, the tech could be used for that purpose alone without adding a pedometer app.

The biggest drawback is that the feature would have to be accurate enough to consistently sense the difference between walking and other types of motion. Otherwise, you wouldn’t be able to text while riding in a car or train.

What about emergencies? Odds are that you’d be dialling 911 rather than texting a friend. And if you really were in an emergency situation, your brain would be even less able to multitask and focus on texting while running from danger.

So even though the idea of viewing the world through your screen might sound cool, texting and walking could still land you in hot water?or straight off the edge of a pier. 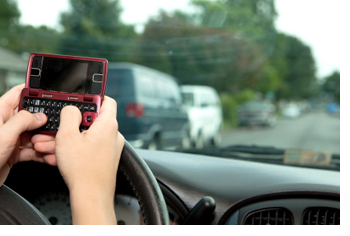 Primal Numbers – It Can Wait

International News Desk – At Home: Toasty Texting – Around the World: Jaws II (or III, or IV, or V)