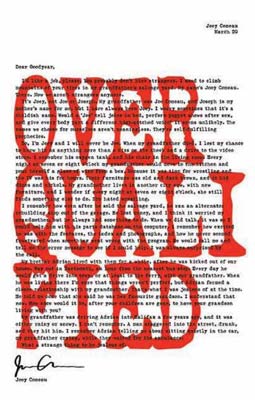 ?The closest to perfection a person ever comes is when he fills out a job application form.?
-Stanley J. Randall

There’s something so captivating about stories told through a series of missives. Just hark back to Up the Down Staircase, an utterly engaging novel manifested in a series of inter-office memos, notes, and teacher’s reports in an inner-city high school. And who could forget Griffin and Sabine, an enchanting lonely-hearts-club love story told in a series of letters and handmade postcards?

But It’s not an easy feat to pull off because letters, at least on the surface, are a dull literary vehicle. And which kind of letter is the dullest you can imagine?

Overqualified, of all things, is a series of cover letters for job applications.

It isn’t exactly a novel so much as a character study. By the end of the book we know Joey’s life story, at least the most salient bits, and in the process of reading his stack of letters to every iconic corporation in North America, his true self slowly comes to the fore.

Why is Joey applying for all these high-end jobs? He isn’t qualified for a single one of them, even remotely. But with utter sangfroid he writes to the New York Times that if a background check shows his credentials to be false, they should take this as a sign of his editing ability.

He’s not lying about his editing ability. Joey revises his own past in a very stream-of-consciousness way, deciding to share, apropos nothing, a memory of a pretty lesbian he once knew. He ends the letter with the dark hint that he’ll make a very good New York Times editor whether they hire him or not.

He writes to the Queen Elizabeth Hospital in Halifax, detailing his inner urge to trade his current career as a systems analyst for Ford for the warmer and more satisfying position of systems analyst in their transplantation services department.

He explains that the efficiency he’s developed on the assembly line should be a great asset in transplantation, adding that he’s discovered that trial and error is a much faster way to get things done than research. He’s also learned that It’s simply a waste of money to find replacement parts for some vehicles and suggests that the medical field should be ready to embrace this reality.

The morbid wit carries over into childhood recollections. He often talks about his youthful misadventures with his kid brother Adrian, his brother in real life, fitting the anecdote to the addressee. For example, for General Electric he tells of how he and Adrian once stole all the light-bulbs going up the stairs in a local apartment building and then threw them all off the upper balcony, relishing the poof and tinkle of each bulb hitting the pavement below.

It’s not all belly laughs. He’s a conflicted soul, our humble narrator; he loves his girlfriend and is racked with lust for others. The job application cover letters are a vehicle for the expression of a troubled mind; to Apple he describes late night angst and despair that lead to talking dirty on the internet while his beloved sleeps.

He often veers off into a fantasy world, like describing to Samsonite how he once opened an old suitcase in his grandma’s house and found a ladder down into the past where the dear ones he’s lost can be found again.

What resonates with the reader is how Comeau uses the job search, an ordeal which in most of us provokes a rich stew of undesirable emotions? dread, fear, timid hope, guarded optimism, humiliation, shame, inadequacy, etc.?and makes an utter mockery of it all, allowing the reader to let off the pent-up anxiety That’s normally associated with any endeavor requiring one to put oneself on the market. Joey Comeau has apparently experienced enough pain to make him ready to help us not to take our fears of loss, rejection, and failure so seriously.

Having grown up near an Acadian community in Nova Scotia, I’ve known many Joey Comeaus. I once had a neighbor named Joe Comeau who had twelve children, three of whom were named, Joe, Joey, and Joseph. I remember the father?we always called him ?Old Joe??coming into the local restaurant when a fire alarm was going off in the station nearby. The waitress asked him if he knew where the fire was. ?Yes,? he said calmly. ?It’s at my house.? And it was.

I’m pretty sure these two are related.

Overqualified manifests four of the Mindful Bard’s criteria for books well worth reading.

It’s authentic, original, and delightful.
It provides respite from a sick and cruel world, a respite enabling me to renew myself for a return to mindful artistic endeavor.
It’s about attainment of the true self
It makes me appreciate that life is a complex and rare phenomena, making living a unique opportunity. 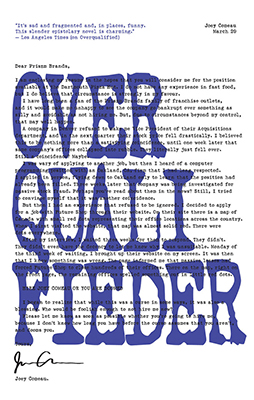