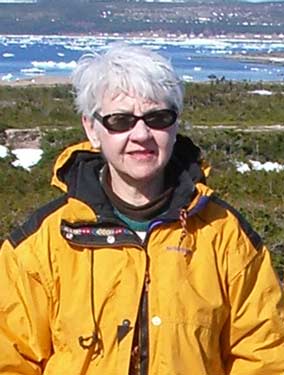 Dr. Laurie Milne is the current Co-ordinator of Anthropology at AU. She’s authored three of AU’s Anthropology courses (ANTH 272, ANTH 394, and ANTH 320), and currently is a tutor for six courses while co-ordinating ten courses overall. She is also a subject matter expert in the area for AU, which means she is consulted on courses in development. While Anthropology is not a huge enrolment area at AU, she deals with about 75 AU students in her courses.

She kindly agreed to be interviewed by The Voice Magazine and here is the gist of that interview:

How long have you been working with AU?
I started tutoring for AU in 2000. I taught fulltime at Medicine Hat College from 1971 to 2012 when I took compulsory retirement and am now a part-time instructor there.

What brought you to start in your field and tutoring for AU then?
I entered the new Department of Archaeology at the University of Alberta at Calgary in 1964 to fulfill a childhood dream of becoming an archaeologist and I commenced work with AU because I was interested in distance education and working with students.

Once I had that, I started working at Medicine Hat College, but at 40 I took a sabbatical and started my doctoral work, eventually getting my Ph.D in Archeology from Simon Fraser University. I served on the Medicine Hat College Board of Governors for two terms, but don’t feel I’m a great representative for faculty, as I understand the constraints that the boards are working with too keenly.

I started working as a tutor for AU and since July 01, 2012 have been an Academic Coordinator of Anthropology. I work with Dr. Sheila Greaves at AU.

There’s also a major revision of Anthropology 375, the Anthropology of Gender, which I’m overseeing. we’re revising it because there have been some major changes in the textbooks.

Also, I have had two students that went abroad for archaeological field-schools, one to Italy and one to Ireland. As a tutor, I get testimonies from them on their experiences and hear papers in at conferences about field schools, so if students express an interest, I can send them information or direct them to where there are good opportunities for field-work.

What are the common pitfalls you see students running into?
Procrastination is definitely the foremost. Students leave things until late in their contract, and then have to scramble to complete course requirements or take extensions. When they do this, it means they often have to do their work without giving themselves any chance to incorporate tutor feedback.

What have you been finding interesting to you currently in your field?
The writing and production of the new course, Anthropology 320: Ancient Civilizations has been most gratifying. In addition, I attended a wonderful conference in Santa Fe, New Mexico in October, 2013. It was called “Paleoamerican Odyssey” and dealt with early settlement of the Americas.

I also write book reviews for the Canadian Journal of Archeology, and Plains Anthropologist. Also, last year I had a paper published in an edited volume dedicated to my first archaeology professor from the University of Calgary, Dr. Richard G. Forbis.

And outside the field?
My passions are travel, golf, and gardening. I have grandchildren who live near Edmonton and we have been taking an annual hiking holiday in the Lake O-Hara, Lake Louise and Bow Falls areas for the past four years. Each year I also attend the Banff Mountain Film Festival and holiday in Santa Fe, the Annapolis Valley, and the Big Island of Hawaii.

While I mostly do flower gardening, I grew up in Olds, Alberta, and the growing season here in Medicine Hat is just amazing by comparison. I had never seen peppers growing or tomatoes ripening on the vine while I was up there.

I also can’t forget my dog; he’s a pug whom I walk four times per day. ?Finn the Farting pug?, we call him.

Finn the Farting pug? Do I dare ask where the name came from?
You can probably guess.

What is your opinion on AU’s move to e-texts so far?
I’ve got one course that has moved to e-texts. I’ve found it a challenge when they put the new text online and have had to learn how to navigate the new systems. I think the online texts look beautiful, but students tell me that they are printing it, not reading it online.

A big initiative related to this though is online exams. I’ve had three people who have written online exams so far, and my judgement is that they’re not writing to the same level of detail they used to with pen and paper. However, I am encouraging students to include more information and have had one student tell me that she really liked several features of online exams, including the word count aspect.

I think there’s still some adjustment time required for these. We get the electronic exams, and I still have to read the manual before grading to be sure I’m following the right procedures, and the system still has some glitches. There have been wrong exams sent, and there was one exam where there was an error in the total number of marks assigned to each question. Fortunately, a manual grade is still entered in the system, but tutors and markers have to be careful about these things.

How about the shift to a call-centre model?
I don’t know enough about it to say much. A few years ago a friend registered in an accounting course that was done through the business school call-centre, and she told me nobody ever returned her phone calls when she called in. Eventually she dropped the course. However, personally, I’ve no experience with it.

Do you have an opinion on social media use for education?
Honestly, I don’t know enough about it.

That’s fair. So what do you think AU needs to do to improve itself in future?
AU has many strengths. One of the ones I see is the service that gets provided through the AU helpdesk, and the staff that are more than willing to aid and help students and staff where they can. Also, the quality of courses that I’m overseeing is first rate, and most of my college students from Medicine Hat would never be able to complete these. In my area, the student who completes an anthropology degree at AU will have far more writing experience and knowledge than they’d ever have received from a regular college. These students are graduating with writing and critical thinking skills that college courses just don’t provide.

When I look at the people who work at this institution, the diversity of people, and the wealth of backgrounds and experience, I think that students are quite fortunate to have that. Then there are the professors, and AU staff, and all of these tutors who also have their own wealth of backgrounds, when taken all together It’s an extremely diversified set of experiences that are being brought to the table here for AU students, and That’s really a positive factor. If there’s anything I wish could change, it is that the finances would have allowed AU to continue to hold tutor seminars in Edmonton. That was a great chance to meet people and give faces to those we’re communicating with all the time. I miss the workshops and seminars as their content was first rate.