Columns
The Voice
The Mindful Bard – Who Cares? 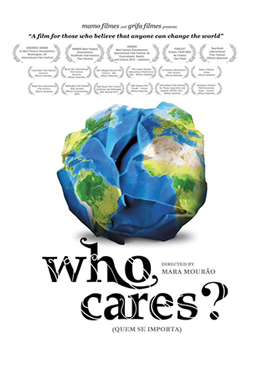 “I define ideas like a parachute. A parachute is a wonderful achievement only when it is used for what It’s meant for. If you wrap a parachute around yourself it becomes a useless object, but if you go to a high altitude and jump you must release your parachute so it comes out open . . . Ideas are things you should be able to throw open.”
-Isaac Durojaiye, founder of DMT Mobile Toilets, Nigeria

As a child, Karen Tse had nightmares about people being tortured. She’d wake up relieved to realize it was just a dream, only to become tormented again by the thought that somewhere in the world this dream was a reality.

Karen eventually founded International Bridges to Justice, an organization devoted to ending torture. She’s been amazingly successful in advocating on behalf of torture victims and also in compelling some countries to end torture. Despite being surrounded by naysayers, She’s convinced that torture, like slavery, is something that can be ended.

The term “social entrepreneur” was first coined by Bill Drayton, founder of Ashoka, a global organization devoted to seeking out, encouraging, guiding, and supporting those who choose to invest in the best interests of Planet Earth.

But isn’t “social investing” an oxymoron? How can working toward a better world be a personal investment? And why would people invest their lives in helping others when they could be doing what people are supposed to be doing, i.e. working hard to make enough money to earn their bread and, ideally, building capital?

Who Cares? is a beautiful response to all of these questions. It’s a roadmap to a better world, a vicarious journey of healing, a reference work for social activists looking for good causes to join, and?believe it or not?yes, a feel-good flick, especially for those of us who turn on the news only to become smothered by helpless rage and despair.

How can a film about activism make us feel good? By reminding us that there are people out there who don’t waste a second on hopelessness, escapism, or whining. These people simply get busy and relentlessly push toward positive change in the world.

At first glance, one would think It’s either crazy or masochistic to throw time and money at social and environmental problems. A kind of granola martyr, if you will, but dig a little deeper and you can see where enlightened self-interest is a key incentive. Here are a just a few of the personal advantages of devoting one’s life to changing the world for the better:

– Investing in the world makes the world a better place for you personally.
– You develop a milieu of profound, satisfying, and constructive friendships.
– Watching something grow and change for the better is one of the most rewarding experiences imaginable.
– The experience of social entrepreneurship enables us to develop more fully as human beings.
– When You’re part of the solution, You’re no longer part of the problem, which makes it easier to sleep at night.
– As research has shown, money can make you happy, but only up to a certain point; after basic needs and a little extra for pure enjoyment, money doesn’t make us any happier. Financial capital doesn’t make us happier. What does make us happier is living in love.

Who Cares? takes us around the world to remind us of the problems afflicting humanity and to lift our hearts with evidence that things are changing. There’s some wonderfully symbolic animation that pushes this point home. There are also many wise words about how we got here and why working toward change is not a sacrifice but rather a joyful, fulfilling way of life.

Who Cares? manifests nine of the Mindful Bard’s criteria for films well worth seeing.

It’s authentic, original, and delightful.
It poses and admirably responds to questions that have a direct bearing on my view of existence.
It provides respite from a sick and cruel world, a respite enabling me to renew myself for a return to mindful artistic endeavor.
It’s about attainment of the true self.
It inspires an awareness of the sanctity of creation.
It displays an engagement with and compassionate response to suffering.
It gives me tools of kindness, enabling me to respond with compassion and efficacy to the suffering around me.
It renews my enthusiasm for positive social action.
It makes me appreciate that life is a complex and rare phenomena, making living a unique opportunity