Columns
The Voice
In Conversation with Jack Malmstrom, Part I

“Memory is a paradise out of which fate cannot drive us.”

Jack Malmstrom is the swing clarinetist who put together Jack’s Cats, a vintage-style jazz sextet based in Halifax, Nova Scotia, that also includes keyboardist Gordon Fader, guitarist Dylan Quinn, bassist Mark Roberts, drummer Dave Skinner, and vocalist Kitty Farmer. The project, which quite successfully revives the “pre-bland” portion of the big band era in music, has also attracted the participation of some of the best jazz names in Atlantic Canada, including Holly Arsenault, Adam Fine, Mike Lee, and Kevin Cox.

Their debut album, Low Down Dirty Swing, comprised of both matchless instrumental arrangements, standard covers, and original tunes, will be out this month. Recently, bandleader Jack took the time to talk to Wanda Waterman about his fascination with vintage jazz and his long and winding road to Low Down Dirty Swing.

Obsession with Period Expression
Jack Malmstrom’s obsession with the 1940’s goes back to his childhood in California, where he set up his own backyard “swing nightclub” retreat inside a refrigerator box and sat for hours with a transistor radio tuned to vintage jazz stations. He recounts on one occasion being taken to Disneyland and being so mesmerized by a jazz musician that he was deaf to his parents? urgings to come along and see Mickey Mouse. This obsession led him to an intense desire to produce those sounds himself.

Life got in the way of his jazz dreams until adulthood, however, when he finally began pursuing his dream of becoming a jazz musician by seeking out some good teachers and applying himself to the 10,000 hours of practice allegedly required to create a professional musician.

“There wasn’t a chance for me to learn music during my childhood,” he admits, “but I was always obsessed with mid-twentieth-century popular culture and slowly began to see jazz, and the clarinet in particular, as perhaps the purest expression of the period. This interest grew into a passion in early adulthood, and by my mid-thirties I’d finally carved out the opportunity to begin musical instruction.

“I hope That’s encouraging to any adults who think they’re too old to pick up an instrument,” he adds.

The Dual Appeal of Vintage Jazz
Jack points out that vintage jazz has a dual appeal: “It can be a celebration of American culture’s ideal of individual iconic invention or an expression of class, racial, or gender angst. It has a fascinating, almost architectural, formalism. At the same time, It’s just damn good party music. My job is to help it flow out of my band mates and offer it to our friends in the audience.”

Reanimating a Lost Culture
“I’ve always thought that time travel, if possible, would actually feel like culture travel. Push the button on your time machine and you arrive in a vaguely familiar country? the sky, grass, and trees might look unchanged, but the locals are wearing their own unique clothes, speaking in a somewhat foreign tongue, and engaging in their peculiar customs.

“At Jack’s Cats? performances I stand at the edge of stages gazing out across darkened rooms filled with Lindy-hopping fans while our elegant vocalist, Kitty, croons some catchy tune and the band beats out a swingin? rhythm. A lost culture has been reanimated and It’s just the most exquisite sensation of time travel imaginable.

“But we’re not strict historical re-enactors, and It’s our hybrid of past and contemporary culture That’s turned out to be most exciting and interesting.”

The Artistic Benefits of Long-term Cultural Immersion
“Somebody supposedly asked the artist James Whistler, ?How long did it take you to paint that?” and his reply was, ?A lifetime.?”

“I think endless, constant, cultural immersion is essential. I was very fortunate to have studied with master woodwind instructor Leo Potts, from whom I learned the fundamentals of what music is. But knowing how to play your horn is just a tiny part of the job of bandleader.”

A Miscellaneous Yet Appropriate Education
Jack Malmstrom’s life looks like that of a Renaissance man, branching into several different fields whose benefits now converge to make Jack’s Cats a success.

Jack studied fine arts in university and was an accomplished painter for years. The transition from visual art to musical performance was almost seamless. In addition his work in advertising gave him the leadership skills he needed to run a tight musical ship.

“My days as a student of visual art now help me communicate about human nature in another non-verbal medium?music; my years as an advertising agency creative director taught me how to lead a team of creative professionals to accomplish tangible goals.

“Time spent making mistakes as a small-business entrepreneur has proven invaluable. Leading the Cats draws upon all my life’s skill and experience, but It’s hugely exciting and invigorating to be running flat out, at my full artistic, intellectual, and physical capacity.” 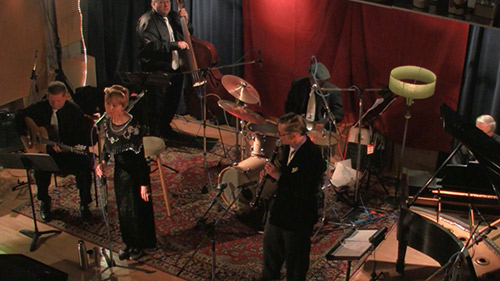