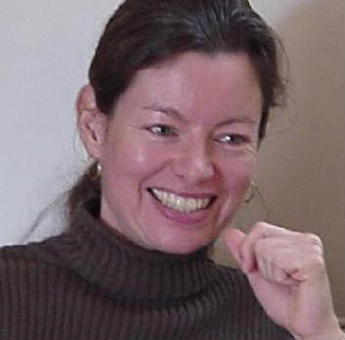 Dr. Catherine Caufield started tutoring for AU in December of 2013 in the Religious Studies department. She currently has approximately 25 students under her wings in RELS 204 and 380, and kindly consented to be interviewed by The Voice Magazine. Here’s the gist;

What brought you to start in your field and tutoring for AU?
I had a natural affinity for this area since I was a child. I was drawn to the myths, the stories, the rituals, and the ideas of it. Initially I trained as a nurse however. Then in the ?90s, after I had been working in the critical care area for about 7 years, reorganization and restructuring came and I lost my job. While waiting for things to improve so that I could resume full-time nursing again, I decided to do something I had always been interested in. So I enrolled in the Religion and Culture program at Wilfrid Laurier University. After completing 10 qualifying courses (because my undergraduate degree was in Nursing), I was able to go forward. My nursing degree helped keep me out of debt while I studied, getting my Masters at Wilfrid Laurier and then my Ph.D. in Religious Studies at the University of Toronto. It was not my plan, but things just kept opening up for me in the area of teaching and research. Back in 2002 I accepted an appointment with the Faculty of Nursing and then with the Faculty of Arts at the University of Alberta. I was there for almost 11 years before coming to AU.

What are the common pitfalls you see students running into?
Taking the course for the paper rather than the knowledge. I hope that students find some kind of passion in the material. While It’s important to get a letter grade and meet the criteria for their degree, when the focus is singularly on the letter grade you can forget that the material actually means something to people and the courses can help you figure out what it is.

For instance, if you don’t have a religious background, then It’s important to recognize that religion is centrally important to billions of people around and that It’s part of how they shape their lives and be in the world. If You’re just taking the course to fill a requirement on your degree list, then you might miss the significance of that not only for them, but also for us here too.

Similarly, if you are from a religious community, then It’s important to recognize the broad diversity that exists not only between but also within religions. You might live with a particular way of being in the world and be comfortable with that, but others can live very differently, and be just as comfortable in their way and so it is about discovering how to talk about that.

Sometimes It’s difficult to understand the full range?back in 50s there was a sense that religion caused so much damage and was so harmful. That it was coming out of ignorance and that it was going to disappear when people matured and faced facts. But religion has not gone away. By the 80s it became apparent that not only was it not disappearing, particular forms of it were gaining adherents. These tended to be Manichean, fixing things into the black and white of “this is how it is.” This happens in other contexts besides religious ones too of course. And much, but not all, of the media participates in creating and reflecting certain uncomplicated images. Many of the moderate voices within religious communities and Islamic and Christian communities have tended to be marginalized because of it.
There’s richness in plural contexts. There’s arguments made by Beiser that when communities have that diversity they attract high-level businesses because the cultural life is richer in those communities. A broad background of religion in a community can have a positive effect economically on a community because of the kinds of activities available that make it interesting and enjoyable to live there.

What is interesting to you currently in your academic field?
I’m just finishing a book project that is the culmination of my 6 years in the Faculty of Arts researching and teaching in the interdisciplinary space between Religious Studies and Latin American Studies. Azan Fugue: The Neomystical Subject in the Voices of Three Jewish-Mexican Women Writers is a work of literary criticism looking at a selection of fictional narrative that integrates ideas drawn from Jewish mysticism. An interesting point: Mexico is not entirely Catholic, they have a substantial Jewish community and significant literary output. There’s also been a real resurgence of interest in people like Teresa of Avila, and I’ve been looking into that as part of this project.

More recently, my work has moved into the area of religion and healing. I’ve published one article in the area; it can be accessed on research gate. I’ve been examining specifically collaborative efforts by Aboriginals and religious groups, asking the questions like “what are they doing together to bring about healing?” It’s a dicey political field’some of the stories challenge the dominant narrative such as the whole history of the residential schools. It’s focused on a particular perspective but, as is so often the case, there are multiple stories there.

And outside the field?
I’m a single mom with a daughter involved in professional ballet and a son who is into karate and the Edmonton Youth Choir run by Dr. John Wiebe. Doing my own work and supporting them in their development doesn’t leave a lot of time for much else!

What is your opinion on AU’s move to e-texts so far?
I’m a bit old-fashioned. E-texts increase accessibility which is important, particularly given tremendous outreach to remote areas such as students in northern Ontario and or Ireland. But I enjoy the feel of a book in my hands. There’s an aesthetic value as well. Some of the old books with their bindings and the way they were printed are really beautiful.

How about the shift to a call-centre model?
I’m very new to Athabasca University, but it does seem problematic. For someone who’s been in the field for over 20 years, there’s a lot of study and learning that takes place over time and to have that reduced to kind of a clerical function is not only discouraging to the effort That’s been put in, it really reduces how important that experience is. It ties in to that pitfall we talked about earlier. The one that supports the view that you come in, collect your A’s and get the diploma or degree. It seems to me this feeds that factory idea of education.

What do you think of social media use?
It’s difficult to monitor, so It’s not as safe in terms of what it is that You’re actually accessing. When things come under the umbrella of the library they are assessed by librarians, who know what scholarly literature is. Therefore when you access these materials you can have more confidence that they meet academic standards, although you still need to use your own assessment skills that you are learning through your program at AU.

There’s also a problem with accrediting people over social media. Accreditation is a measure of security as to what it is that You’re getting. But on social media That’s very difficult to do. You can’t be sure that the people You’re accrediting are who they say they are. For instance, I just signed in to twitter and to sign in one needs to pick five people to follow. I saw that there are people claiming to be an author I esteem; however, I knew upon reading their twitter feeds that definitely none of them were him. It becomes a question of reliability. Unless You’re very familiar with the field it can be difficult to rely on someone’s assertion as to who they are and so what they know.

So, if You’re looking up things about Islam or any other religion and You’re just relying on social media you could get a particular perspective reinforced. Academic literature should be broader based and neither polemic nor apologetic, which is often what you find through social media.

What do you think AU needs to do to improve in future?
They need to hire more professors. They only have a small professorial contingent right now.

As a tutor I’m paid per paper, per student. It is thus becomes for the instructor a situation somewhat like that of the students just trying to collect letter grades for a piece of paper. Piecework discourages learning or expanding your knowledge. When there are stable working conditions the scholar has time to research and, more importantly, the mental space, to focus on the material and then to bring that new knowledge to the students.