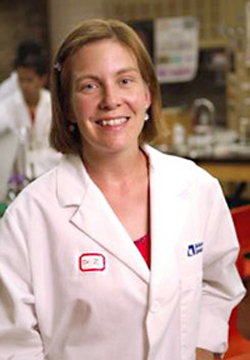 Dr. Shauna Reckseidler-Zenteno is an Associate Professor and Centre Chair for the Centre for Science in the Faculty of Science and Technology at Athabasca University. Currently responsible for about 800 students per year over five courses, Biology 325, 341, 401, 480 and Chemistry 301, she started with AU nine years ago in 2005. She was kind enough to consent to be interviewed by The Voice Magazine, and we talked at some length.

Can I get a sense of your history? What brought you to start in your field and tutoring for AU?
I was doing my Bachelor of Science at the University of Calgary, focusing on cellular and molecular microbiology. But I wasn’t sure what I wanted to do with that. I thought I’d like research, and Dr. Don Woods at the U of C suggested that the best way to know would be to do an undergrad research project. I basically never left. I found it was something that I was good at and so I stayed for graduate school and eventually completed my PhD in Microbiology and Infectious Diseases. I also did a short post-doctoral term there, and then also one in the Department of Surgery at the U of C. I left that position when I was offered the job at AU. At AU I have the privilege of being a professor and a tutor as well as participating on a variety of committees and conducting research.

What brought me to AU was that I had heard AU was advertising for a microbiology professor and I wanted an academic position, so I applied. There were a few others who were also applying for the job, so I was very glad I was chosen, and the timing was excellent. The climate has changed since then. I have PhD candidates now applying for positions in the Centre for Science that require an MSc, so it goes to show how much more difficult it has become to get a job in the field.

What are the common pitfalls you see students running into?
I have the best students ever. When I first started I used to coordinate Biology 230 and 235 as well, which are first year courses. I now have only senior level students. I have always been impressed with the level of students I have encountered at AU. AU students possess a great work ethic, strong background knowledge, and maturity. I call them my whiz kids. I’ve seen the AU population change a bit. Now a lot of young students are coming to AU. They like it because they can complete AU style courses faster than at a traditional university and so they take courses with us to complete their degrees.

Some students struggle with the distance environment as it is new to them. I don’t see it as different from a lecture format, personally. I’ve had bad lectures as a student, and having a study guide that tells you exactly what you need to know is better than a bad lecture. But when you have a lecture you have to go home and study it all anyway from the notes that you made. With the AU style of learning you at least have really good notes.

Staying motivated for deadlines is a pitfall I do often see. In addition, some students aren’t always prepared for the level of detail in the courses and the exams, they are tough courses. While most students don’t expect AU to be easier, there’s still some perception that may be the case. We try to prepare students adequately but some do struggle.

We use the AU Landing for a couple of courses, including CHEM 301, to engage students more with the material and to try to minimize the distance by allowing them to communicate with each other and share resources. We had the largest uptake in CHEM 301 compared to the other courses that were piloted. I think the reason was because as soon as someone would post, the tutors and I would post as well. But some students were not interested in the social networking aspect of the course. They want to get the info they need and complete the course without a lot of interaction. We gave bonus marks for certain activities and students reported that it enhanced their learning in the course. We continue to use the AU Landing as a way for students that want to participate to connect with others.

What is interesting to you currently in your academic field?
Right now my research focus is on two bacterial species. These bacteria cause primarily lung infections or burn infections. we’re running two main projects, one at a lab at the University of Calgary, and one in the lab at Athabasca University. One of these is investigating how the bacterium Pseudomonas aeruginosa survives in water, as That’s unusual since there’s a lack of nutrients for the bacteria to survive. Our evidence suggests they exist in a dormant state for long periods of time. It’s known that some species form spores, like the bacteria that causes anthrax, and so can survive millions of years without food, but these bacteria go dormant and shut down their cellular machinery. They can alter their membranes, which lets them live for around 16 years in water. This is a source of concern in the hospital where this organism can survive in the water supply and infect patients. Our laboratory space is at the University of Calgary Health Science Center. The other project we are working on is conducted up in the science labs at AU. We’ve got a really cool machine that we’re using to look at how new drugs treat biofilm producing bacteria, Pseudomonas aeruginosa and Klebsiella pneumoniae. This is important because they’re very drug resistant, and these infections, biofilm infections, are a major cause of concern in hospitals. This work is in collaboration with the University of British Columbia and we are hoping to identify synthetic peptides that will be effective new antimicrobials.

Pseudomonas aeruginosa is related to the bacterium that causes melioidosis, which is a lung disease that can lead to severe pneumonia. Melioidosis was the basis for my PhD research, but I’m not focusing in that area as much, though the disease remains common in South East Asia.

And outside the field?
I do a fair amount of skiing, because my husband and son both snowboard a lot. My son is on a mission to get sponsored by a snowboard company. Recently, I’ve also been going out with my daughter skiing as well. We were at Whistler and Lake Louise last month, though really I prefer being out on the beach. If I could be reading on a beach every day That’s my preferred lifestyle.

Aside from being a professor I am a very busy mom. With two kids, there are just so many things to do. I didn’t want to be one of those parents, the ones who pushed their kids into everything, but instead my kids have pulled me into it. There is always a lot to do, this practice, that event, and the next thing you know every night of the week is booked. I’ve started to tell people that I have three jobs: a professor, a chef, and a taxi-driver!

Next week, the conclusion of the interview, where we talk about e-texts, the new course model and things she feels would help AU improve.