Way back in 1010 AD, when Oliver of Malmesbury flew 125 paces with a set of homemade wings, there were probably plenty of critics who thought he was crazy to try it. And when the Wright brothers completed the world’s first powered flight in 1903, only three newspapers even bothered to cover the historic event. Now, a group of test pilots are attempting another incredible feat: a flight around the world in a solar-powered plane. Is it an impossible dream, or a sign that we can soon power our world with the sun?

The Solar Impulse 2, and its potential, are enormous?over 5,000 pounds of enormous, with a wingspan of nearly 250 feet (the wingspan of a 747 Classic measures 196 feet). Even at that size, the Solar Impulse can only carry one passenger. Most of the plane’s structure is devoted to the 17,000 solar cells needed to power the engines.

But as this Solar Power World article explains, the point right now is simply to prove that it can be done.

“Our goal,” says pilot Bertrand Piccard, “is to show that it is now possible to achieve things considered impossible without fossil fuels.”

Undoubtedly, the news will intrigue those who already enjoy all things related to airplanes and flight. But the truly exciting thing is the potential the Solar Impulse holds for harnessing the sun’s power for other large, industrial applications.

The issue, of course, is the time, money, and innovation to get us there. Like any other source of power, solar has its own unique drawbacks. Hours of sunlight can vary widely, especially during winter months. Solar panels and arrays are large and heavy, and it can be challenging to find a suitable location?especially in a city. Then there’s the question of how to store and transport that power on a significant scale, such as providing electricity for a mall or factory.

And we can’t forget the dirty little secret that most people don’t know about solar energy. As this Financial Post article explains, the panels that capture all that clean, renewable sunlight are also the source of “millions of pounds of polluted sludge and contaminated water.” In California alone, the hazardous waste created by the manufacture of solar panels was 46.5 million pounds from 2007 to 2011. That’s nowhere near the environmental damage caused by our addiction to fossil fuels, but It’s hardly acceptable if we’re looking for a truly clean energy source.

But much like Oliver of Malmesbury, who broke both his legs when he tested his wings, we’re still in the infancy of making this new technology work for us. We need to innovate, to improve, to focus on the possibilities while overcoming the drawbacks.

So the news about the Solar Impulse 2 holds far more promise than the achievement of an around-the-world flight. It reminds us that, sometimes, even the most impossible things can become possible when we dare to reach for the sky. 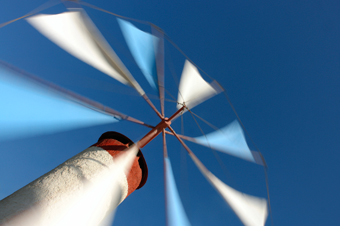