Did you watch AU’s convocation stream at all? I make sure to do so each year, at least on the first day or two, just to see if there are any signs for the future of AU that can be gleaned from the various speeches from the executive or assorted politicians that attend.

This year, it started with the traditional drummers sounding a heartbeat as the graduands walked into the convocation arena and filed up behind the university executive. The drummers, a trio of women called Asani, broke into some traditional native song/cries that nearly cracked my headphones. Frantically turning the sound down allowed me to keep listening as they then morphed to a multi-lingual medley of “Oh Canada,” that you really have to hear to appreciate. The volume they manage to get from just their voices is quite remarkable, and clearly the sound guys for the webstream weren’t prepared for it, as the next day’s performance I noticed they’d adjusted it. I’m told from those who attend in person that being able to be there and listen to the performance live is even better and can “send chills down your spine they’re so good”.

Barry Walker, the Chair of the Board of Governors, presided over the convocation ceremony as usual. This year, in addition to the usual guests, there were also special guests from China, including faculty and students from Beijing Northern University.

The new, interim president, Peter MacKinnon, was one of the first speakers, and you know how new he is because Mr. Walker had to check his notes to read his name. We also had Jeff Johnson, the MLA for Athabasca and Minister of Education who called AU “a great gem for the province of Alberta,” and praised us for leading in terms of access to education. If only those sentiments translated to support on an equal footing with the other universities, it would be interesting to see what AU could really do.

When Peter MacKinnon spoke, he described why he accepted the job of interim president by talking about what AU means to him, starting with a comparison of society between feudal times, where society was defined in terms of relation to land, to the industrial era, a time where society was defined in relation to the means of production, to the knowledge era, where we define our society in terms of the ability to deal with the knowledge economy and changes, and AU occupies a unique and vital place by being an open university, helping all people attain the abilities needed for this post-industrial society. No other Canadian university, he said, makes the commitment to educate people without regard to whether they succeeded in high school, while acknowledging their work experience and successes.

And while he acknowledged that all universities are doing more in the past than they used to for distance education, AU is a pioneer in the field and will strive to continue to be a leader in the field. He was impressed by AU’s commitment to the idea of if you can take the challenge of university courses and succeed, AU wants you to be successful. To me, this bodes well for what he may attempt to do with AU.

After all, if they want us to be successful, presumably they’ll listen to what we say we need to get there, right? 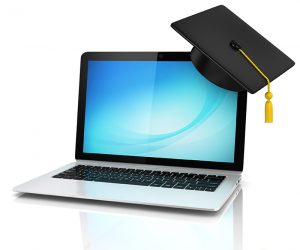 Fly on the Wall—Virtual Convocation 2020