Columns
The Voice
The Mindful Bard – A Call to Action 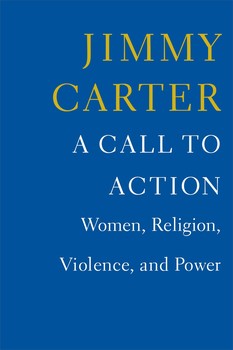 Book: A Call to Action

“I am sending you out like sheep among wolves. Therefore be as shrewd as snakes and as innocent as doves.”
– Matthew 10:16 NIV

“Violence against women is the most prevalent and the most hidden injustice in our world today.”
– Jim Wallis, as quoted in A Call to Action

One dilemma of North American voters is that elections are often little more than strategic popularity contests. Contests in which the prevailing beliefs of resistant portions of the electorate are upheld just long enough to win votes; promises and alliances are often tossed away like dishrags once a position of power has been achieved.

Usually the ruse is in the interests of some hidden corporate or warmongering agenda. In fact, that’s what we’re used to seeing, and so we assume that an ends-justify-the-means approach is a tool of the devil. But what if strategic policies were to be used to achieve positive change?

In Jimmy Carter’s case Machiavellian tactics sure look like an effective means of gaining enough power to change the world for the better. Hardly a typical politician, in his early career Carter looked more like a saboteur among thieves, scouting the territory and pulling any strings he could to reduce the power of those who didn’t exactly have his country’s?or the worlds’s? best interests in mind.

He pretended, as one example in many, to be a segregationist just long enough to get the governor’s seat in Georgia, then quickly returned to supporting integration. (Yes, it made his racist supporters feel betrayed, but the only reasonable response to that would be, “Yeah, cry me a river.”) It was the only way for a humanitarian to have a shot at the presidency in a country in which formidable forces actively opposed any measures leading to equality and social justice.

He doesn’t mention any of this in the book?I only mention it here because when you’re reading about the successes achieved by he and his wife Rosalynn and the many supporters of The Carter Center (a not-for-profit NGO for advancing human rights) it’s good to remember that in the service of justice, equality, ecology, and health Jimmy Carter is ready and willing to exercise a much cunning deliberation.

Carter lost a second term because of a perceived failure to be tough enough on America’s enemies, something guaranteed to lose him popularity in a country with an ultra-powerful fear-mongering propaganda machine. But in the end you’d have to say he won?at least if his goal had been to gain enough power and influence to be able to respond effectively to the world’s suffering.

He didn’t respond to the world’s suffering just by going out there and filling needs. He and his wife and cohorts spent a great deal of time studying the problems before trying out solutions. Their research into why things are as they are is in itself extremely valuable.

One remarkable discovery he cites is the link between gender inequality and violence. Again and again Carter gives us examples of how the empowerment of women leads to social justice. He clearly states that most problems in the world today could be eliminated or at least alleviated if women were given equal rights. For example, increasing education opportunities for women decreases infant mortality and at the same time reduces population growth because educated women use birth control and raise fewer, healthier babies?babies more likely to survive; thus mothers don’t feel the need to keep having more in hopes of having one survive to aid them in their old age.

Gender inequality also increases the level of violence in the world, and violence in turn hurts women and subjugates them further because violence always seems to affect women disproportionately. And accepting that it’s normal to deny education and opportunities to women, or keeping women in situations that sabotage their heath and the health of their children, creates cycles of poverty that damage families, communities, and nations.

When Carter lists the most common crimes against women in the world today, it makes you wonder why you haven’t taken action already?or at least spoken out more. Slavery, genital cutting, infanticide, child marriage, rape, honor killings, and economic and social deprivation are grievous injustices that simply must stop. The book’s “call to action” is an invitation to each of us to become fully committed to human rights and to be ready to act and to support those who are already creating change.

At the end of the book Carter lists 23 steps we can take to reduce the suffering in the world, including giving victims a voice, and encouraging dialogue among men and women on these issues at all levels of society. He also recommends that we reduce violence in general, take a harder stance on sexual offenders and those who cover up for them, and make sure that women and girls have access to information that shows them they’re not alone and that there are sisters and brothers out in the world battling on their behalf. They need to know that they have the right to determine the course of their lives; it’s only the women who can turn this around, but they can’t do it without the right resources and political context.

If you have any doubts about Carter’s wisdom, take a look at his arguments about abortion. The hypocrisy of Republican pro-lifers, who deny single mothers the resources they need to raise healthy babies, and the callousness of those few but vocal pro-choicers, who seem to think prenatal life is no life at all, are quickly put to rest by his cogent solutions to this thorny issue.

The stories of The Carter Center’s humanitarian and civil rights work are inspiring, but at times, devastating, although the clear, simple writing style and compassionate tone make the pill a little easier to swallow.

What’s especially beautiful about this book is Carter’s sincerity regarding his religious beliefs. In this age when so many leaders misinterpret sacred texts to justify violence and injustice, it’s not only refreshing, it’s positively uplifting to encounter a Christian who studies the Bible with the aim of understanding and implementing this central message: “God is love, and those who live in love live in God, and God lives in them.” (I John, 4:16)

A Call to Action manifests five of the Mindful Bard’s criteria for books well worth reading.

– It poses and admirably responds to questions that have a direct bearing on my view of existence.
– It inspires an awareness of the sanctity of creation.
– It displays an engagement with and compassionate response to suffering.
– It gives me tools of kindness, enabling me to respond with compassion and efficacy to the suffering around me.
– It renews my enthusiasm for positive social action.

Not All Who Wander are Lost