Columns
The Voice
The Mindful Bard – Is the Man Who is Tall Happy? 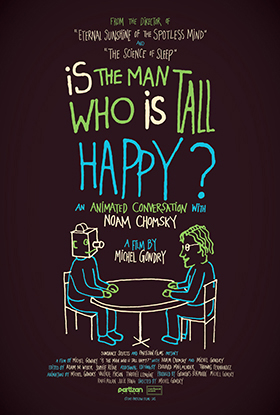 Film: Is the Man Who is Tall Happy?

“Reality is simple and it’s our task to show that.”
– Noam Chomsky in Is the Man Who is Tall Happy?

Once upon a time a little donkey was turned into a stone. When some children told the donkey’s parents that the stone was their son, the parents didn’t believe it. Finally the stone was turned back into a donkey.

The lesson? Our ideas of objects are not based on their physical appearances but rather on the mental conceptions we impose on those objects, such as the notion of continuity that the children in this tale imposed on their little donkey friend; they retained an awareness of his true identity even when he no longer looked like a donkey.

This is just one of the many ideas presented by linguist, thinker, political polemicist, and activist Noam Chomsky in an interview with Michel Grondy, the French filmmaker who, during the nineties, was a much sought-after musical video director for Björk and the Rolling Stones, and who was also a co-director of the remarkable feature Eternal Sunshine of the Spotless Mind.

The dialogue between these two, quite different, men is illustrated by animated graphics (they look like blackboard doodles with coloured chalk) that illuminate each difficult idea that proceeds from Chomsky’s mouth.

The synergy is palpable. It’s utterly inspiring to see a vibrant, enthusiastic, and curious visual artist dialogue with a towering intellectual; it’s the ultimate creative petri dish, and the results are almost divine.

The technique alone is fascinating and lends a delightfully playful quality to ponderous subject matter; the few sequences showing Chomsky talking were filmed on a Bolex Super-8 camera, and the rest of it is just his voice and the doodles dancing across the black screen, interspersed with the occasional old photograph. The drawings illustrate Chomsky’s words, bringing them to life and fixing them in our minds in a way that just a talking head could never do.

Grondy’s method of presenting Chomsky’s ideas renders them exceptionally clear, but Is the Man Who is Tall Happy? isn’t a film for the intellectually fainthearted. It does, however, hold enormous rewards for those who hang in there. And you don’t have to understand it all to enjoy it.

One effect of the animated graphics is ironically to more clearly delineate Chomsky as a thinker and a person, and to present an appealingly whimsical survey of his life and thought. The questions Grondy asks are specifically designed to touch on the main points of Chomsky’s philosophical work while humanizing him by getting him to talk about his childhood, his marriage, and his children.

A secondary effect of this groundbreaking approach is the showcasing of Gondry’s phenomenal creativity and self-discipline. Gondry comes across as an ecstatic creative force with the enthusiasm of a child at a carnival, and at the same time as a hardworking schmo who spends countless hours hunched over a drawing pad?a model of artistic achievement well worth imitating.

Just watching this is incredibly stimulating. It’s a striking example of how quality, engaging art can be made with just creativity, very simple tools, a vision, and dogged determination.

As for the film’s enigmatic title, don’t waste too much time trying to figure out what it means and how it relates to the film?just try to appreciate how cool it is.

Is the Man Who is Tall Happy? manifests nine of the Mindful Bard’s criteria for films well worth seeing.

– It’s authentic, original, and delightful.
– It poses and admirably responds to questions that have a direct bearing on my view of existence.
– It stimulates my mind.
– It inspires an awareness of the sanctity of creation.
– It displays an engagement with and compassionate response to suffering.
– It gives me artistic tools.
– It makes me want to be a better artist.
– It renews my enthusiasm for positive social action.
– It makes me appreciate that life is a complex and rare phenomena, making living a unique opportunity.

Jesus and Buddha Version 2.0 fall far short of the originals