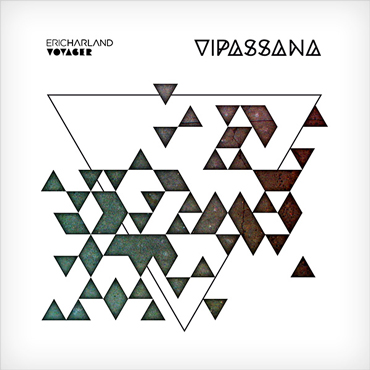 “E-Land in the house
Layin? down tracks
Tryin? to promote consciousness
Come on . . .
It’s about you. ”
– Eric Harland on “Relax”

Eric Harland’s roster of achievements, collaborations, and appearances is jaw-dropping, and to top it all off he’s also an ordained, seminary-trained Baptist minister and has modeled for some of the world’s finest style rags.

The last accomplishment must be the ultimate “in-your-face” to those who teased and bullied him when he was an obese teenager. The lonely boy’s obsession with drumming turned into some pretty important kudos in his teens, and when Wynton Marsalis noted his talent at a music workshop it wasn’t long before Harland began the climb to jazz notoriety.

His mother claimed to have seen a vision about him when he was born, prophesying a divine calling that, when you hear his music, you’d be hard pressed to doubt; he displays a mystical bent at every turn of word and beat. Even the title is numinous; Vipassana is the Buddhist meditation of seeing things as they really are, a concept that no doubt contributes to the authenticity of this music.

Harland’s contribution to the future of music in this album is that It’s a unique mélange?serious jazz uncompromised by its appeal to a younger and perhaps less jazz-steeped audience, delivered with passion and unquenchable joy.

Vipassana, his second solo album, keeps one foot solidly planted in modern jazz and the other doing its own little funky little trip hop dance. It’s a singular achievement?Harlan is one of those rare drummers who can almost generate a melody with his richness of pattern, texture, allusion, and counterpoint, and he’s finally manifested the fullness of his phenomenal talent.

Often when bassists or drummers make solo records they allow their own playing to be buried under more commanding instruments, but this is hardly the case here. The very present salience of the drums on each track, although never overwhelming, is unflaggingly striking, engaging, delightful, and significant within the context of the exquisite contributions of the musicians.

The second most incredible performance on this album is from pianist Taylor Eigsti, a technical maestro who sounds inspired and deliciously reckless; every phrase is a treasure.

The hip-hop, spoken-word segments are refreshingly cliché free, notably “Vi,” a hip-hop survey of the history of black music and poetry in America; It’s an amazing tapestry of sounds and words that brings history vividly to life.

Other high points: “Raghavan,” “Relax,” and “Eminence.” But really, It’s all good.

Vipassana manifests six of the Mindful Bard’s criteria for music well worth hearing.

– It’s authentic, original, and delightful.
– It provides respite from a sick and cruel world, a respite enabling me to renew myself for a return to mindful artistic endeavor.
– It’s about attainment of the true self.
– It inspires an awareness of the sanctity of creation.
– It displays an engagement with and compassionate response to suffering.
– It makes me appreciate that life is a complex and rare phenomena, making living a unique opportunity.