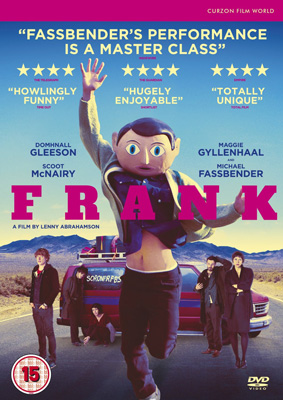 “What makes the desert beautiful,” said the little prince, “is that somewhere it hides a well . . .”
– Antoine de Saint-Exupéry in The Little Prince

And what makes Frank’s huge papier mâché cartoon head beautiful is that it hides a beautiful human being, one who happens to suffer from a mental illness, but who is, nonetheless, a productive, self-actualised person who inspires others and creates brilliant songs. Knowing that It’s the handsome actor Michael Fassbender who plays Frank makes the head all the more magical.

The Original Frank
If you know anything about Captain Beefheart, Ivor Cutler, or The Incredible Strong Band, you’ll see elements of them in Frank, but Frank-the-character was inspired by Frank Sidebottom and is very similar in appearance to that fake-head-wearing character conceived from the fertile brain of British entertainer Chris Sievey (one of the screenwriters, Jon Ronson, once played in Sievey’s Oh Blimey Big Band and so had insider knowledge). Frank Sidebottom is campy family fun, and this film took that and ran with it until it became fringe theatre of the highest calibre.

Frank never takes off his fake head. He dresses like Mr. Rogers. When told that the head is a little intimidating, he kindly replies, “But underneath I’m giving you a welcoming smile.”

Frank is the lead singer of an experimental band called “Soronprfbs,” and in this capacity he’s become the creative guru for this small group of mad artists.

Exploiting the Need to Be Known
Mental illness and eccentricity aside, Frank, being human, has an ego, and the ego needs to be seen and loved by many. And in the Internet age, exploiting the need to be seen, heard, and known is big business.

Social media forms such an integral part of the film’s character that It’s almost like a ubiquitous prop. But It’s not painted in flattering colours here; we see the mindless insults and blind worship that can be quickly whipped up by a bizarre media event or surprising story line, but in the end social media publicity tries to usurp the substance of life and humanity, replacing it with vacuous art and then dictating to the rest of us that this is precisely what we ought to love.

Frank clearly faces the threat of such usurpation; he himself is full of substance, and, as long as his bandmates follow his aesthetic and don’t get distracted by goals as trivial as building an audience, their work has substance, too.

Frank’s Amazing Sound
The sound track will tickle you pink. It’s impossible to nail down the musical genre here but the music is pretty darn wonderful, weaving neo-grunge, nerd rock (à la The Bare Naked Ladies and They Might Be Giants), anthemic ?90s punk à la Fucked Up and Beth Ditto, aleatoric experimental music along the lines of Jon Cage (including “found sounds”), and elements of beat poetry.

Unglamorous Creative Process
Substance is less salient in the character of Jon, the protagonist and a newcomer to the group. As much as he longs to create something great and be recognised for it, he has no talent. (Writers will get a hoot out of his clumsy efforts to generate song lines from the mundane events of the street, a kind of parody of the often very awkward and unglamorous creative process.) To make matters worse, he’s easily distracted by the prospect of quick and easy fame proffered by social media sites like Twitter.

Jon brings money and publicity to the group, which would be helpful if Jon were not at the same time trying to muscle in on the creative territory over which Frank so majestically reigns.

Like Dostoyevsky’s protagonist in “The Dream of a Ridiculous Man,” Jon clearly senses what an awesome privilege it is to be a part of this beautifully insane group of people in the marvelous and nerve-wracking process of putting an album together. But it isn’t long before his ego all but destroys the magic.

He comes head-to-head with Clara, who has seen through him from the first; if Jon is the ego’s fear of failure and invisibility, Clara represents the ego’s fear of success and notoriety (i.e. the ego’s will to maintain its integrity). Between these two fears one wonders how musicians can maintain any sanity at all.

Dispelling Myths
Frank quickly dismisses myths about madness. For one thing, nothing terrible happened to Frank to make him what he was (he came from a safe, comfortable, loving, middle class American family). It also points to the well-evidenced fact that the mentally ill are creative in spite of their illnesses, not because of them.

Irony and the Dawn of the Gods
A telling bit of irony is that the band’s name, Soronprfbs, cannot be pronounced. There are shades of deity in such a concept, and so we’re drawn to Northrop Frye’s observation in Anatomy of Criticism that works that are heavy on irony always end up pointing to the origins of things?the births of the gods, even?and the characters take on mythic proportions. This is exactly what happens at the end of Frank.

Frank manifests 10 of the Mindful Bard’s criteria for films well worth seeing.

– It’s authentic, original, and delightful.
– It poses and admirably responds to questions that have a direct bearing on my view of existence.
– It harmoniously unites art with social action, saving me from both seclusion in an ivory tower and slavery to someone else’s political agenda.
– It provides respite from a sick and cruel world, a respite enabling me to renew myself for a return to mindful artistic endeavor.
– It’s about attainment of the true self.
– It inspires an awareness of the sanctity of creation.
– It displays an engagement with and compassionate response to suffering;
– It makes me want to be a better artist.
– It gives me tools of kindness, enabling me to respond with compassion and efficacy to the suffering around me.
– It makes me appreciate that life is a complex and rare phenomena, making living a unique opportunity.

Many thanks to Bill Waterman for invaluable research assistance.