Columns
The Voice
The Mindful Bard – The Signal 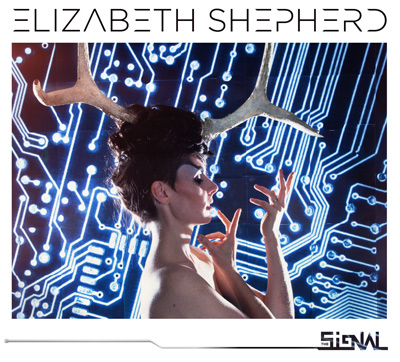 “I believe in God, as mother. She’s good to me and keeps me going. I’m aware of how dysfunctional and unjust our world is, and I feel the need to use my musical platform to try to bring some joy?something more beautiful and human than the dominant madness.”
– Elizabeth Shepherd in an interview with Wanda Waterman, June 2013

I first heard of singer, pianist, and composer, Elizabeth Shepherd from her publicist just before her appearance at the 2013 Montreal Jazz Festival. I was impressed with her latest album (a collection of standards), just not impressed enough to recommend it to my readers.

Still, I was glad to do an interview with her, and was thoroughly delighted with her story?the tale of the daughter of a Winnipeg Salvation Army family that moved around a lot. Elizabeth always found devoted support for her musical education from other Salvation Army musicians wherever the family moved.

I was also impressed with her excellent artistic tastes, which included an affinity for the Tao te Ching, the films of Kurosawa, and the music of Miles Davis; here was a woman who nurtured her muse with nothing but the best.

It’s all paid off; The Signal, a collection of her original songs, is head and shoulders above all her previous albums.

But is it jazz? Or is Elizabeth just another musician advanced enough to be granted a spot at a jazz festival (because there aren’t enough “real” jazz musicians out there to fill the world’s jazz festival schedules)?

Yes and no. Shepherd came to jazz late and so had already developed her musical chops in too many different directions to fit neatly into the same room with the best of today’s strictly-jazz artists.

But here’s the thing: she swings. Just a little, and not all the time, but swing being one of the essential components of jazz, it matters. Swing is that special quality of jazz rhythm in which the first beat is a loving caress that turns the second beat into a gasp of pleasure. If you take this special element and add it to the music of someone writing lyrics in the tradition of Joni Mitchell, Kate Bush, and Björk, you’ve got some amazing alchemy.

More potent additions to the mix include some carefully chosen and artfully incorporated artists including jazz guitar icon, Herbie Hancock, and West African guitar master and vocalist, Lionel Loueke. (I was certain I heard Cassandra Wilson on the title track, but since I can’t find her name in any liner notes I have to assume Elizabeth is doing an extremely good impression.) These and a few more big names rise to the challenge of interpreting Shepherd’s original, and quite feminine, aesthetic very well.

It’s no wonder that Shepherd has been hailed as one of the voices reinterpreting jazz for a post-rock generation. This is not synonymous with a dumbing down?to interpret jazz for today’s listeners requires a high level of sophistication, a broad range of influences, and a degree of relevance to today’s concerns.

All of these features are present in this collection of original tunes, showcasing not only Shepherd’s songwriting and arranging skill, but also her social conscience. She’s not preachy, but her eyes are open to racism, sexism, and economic exploitation, and she frames instances of injustice with a special respect and compassion for victims as she pays tribute to their suffering.

She attributes this new social awareness to her relatively new status as a mom (her daughter’s now three), citing a need to do what she can to influence the world her daughter has entered for the good. At the same time she buries the prevailing prejudice that having babies compromises a woman’s creativity; this is one of the most creative, inventive, and delightful albums of the year, chock full of beautiful sounds, mental stimulation, and pure fun.

The Signal manifests eight of the Mindful Bard’s criteria for albums well worth a listen.

– It’s authentic, original, and delightful.
– It harmoniously unites art with social action, saving me from both seclusion in an ivory tower and slavery to someone else’s political agenda.
– It provides respite from a sick and cruel world, a respite enabling me to renew myself for a return to mindful artistic endeavor.
– It’s about attainment of the true self.
– It inspires an awareness of the sanctity of creation.
– It displays an engagement with and compassionate response to suffering.
– It renews my enthusiasm for positive social action.
– It makes me appreciate that life is a complex and rare phenomena, making living a unique opportunity.