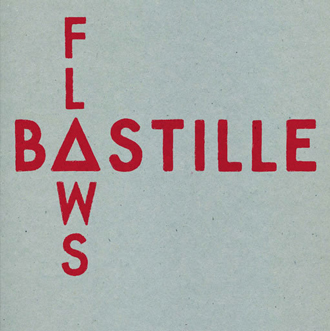 London rock band, Bastille, is back with the single, “Flaws”, released earlier this year. For fans of Bastille’s popular single “Pompeii”, “Flaws” promises the same great vocals and lyrics combined with rhythmic synthesizer, keyboard, and drums. “Flaws” is available through iTunes as a single, or part of the albums Bad Blood and All This Bad Blood.

Formed in 2010, Bastille has become increasingly popular, and have been nominated for several awards and even have won a few, including a Teen Choice Award for their song “Pompeii” in 2014. Bastille is similar to many other popular rock bands like Imagine Dragons, Foster the People, Of Monsters and Men, and Capital Cities, and can be heard on many different radio stations.

“Flaws” was written by the band’s founder and lead vocalist, Dan Smith. Immediately, the listener is captured in the beginning by the soft synthesizer. The drums are light in the background, adding just enough rhythm to carry the song forward, and only crescendos at important points in the song, like the transition between the chorus and the next verse of the song. The predominant keyboard and piano is the bulk of the sound, yet the instruments do not dominate the overall sound, and only act to enhance the singing.

I personally love Bastille’s vocals. I find that their British accents add to the overall song, and the way that they pronounce their words while singing adds to their unique image as a band. The singing is “Flaws” is similar to Bastille’s other songs: the soft vowels, the light and flowing melody, with emphasis on the important parts of the lyrics. So in that respect, this song is not different from the band’s other music. However, I find the lyrics in “Flaws” to be so poetic, that if they are simply read, the music appears to be naturally imbued in the words.

The lyrics easily read like a love song, with the speaker admiring the free-spirited ways of the person that they are singing about. However, it also reads like the speaker is singing about self-acceptance, and the importance of recognizing your weaknesses, or flaws, as well as your strengths. What do you think? How does this song speak to you?

Accompanying this song is a wonderfully creative video, which can be viewed on Youtube. The video is a touch macabre, although with an unusual cheeriness to it, but I liked it. The video is more of a short movie, and with an almost voodoo inspired story, I think it fits well with this time of year. Be sure to check it out.

Overall, “Flaws” is similar to their other music, but it is simple and the lyrics help set it apart from their other more popular singles such as “Pompeii”. The song is short and ends somewhat abruptly, but that seems to fit with the overall theme of this song. I think this song is great to listen to while reading, or at any time when you like to listen to music.

If you are a fan of popular rock, and Bastille’s other songs, be sure to check out “Flaws”.