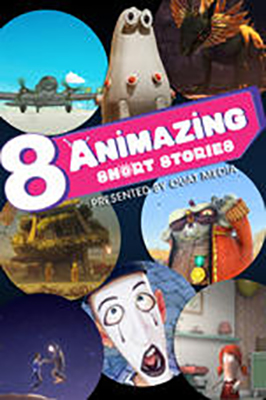 “Love and death are the two great hinges on which all human sympathies turn.”
– B.R. Hayden

These international animated shorts, winners of the first ever AniMazing Spotlight competition, have some common elements. There’s no dialogue in any of them, for one thing, which makes them watchable in any country, and the themes are universal.

The films were judged for uniqueness, quality of narrative, character, animation, ingenuity, sound, and, yes, the message. The judges are from all over the world and come from very different backgrounds, and yet a commonality emerges. There’s a preoccupation with death and love in these films. Animation makes the reality of death pill easier to swallow and takes the edge off the pain of love.

It’s the “fun” factor in cartoons that enables them to deliver difficult truths without inciting anger and backlash. Humour being one of the healthier defense mechanisms, we should indulge ourselves freely in this sort of entertainment; think of it as cultural therapy.

Here, in my opinion, are the highlights:

In À la Française some rather obscenely drawn chickens (just look at one still photo and you’ll see what I mean) dance with great pomp and ceremony in an 18th century French court that looks a lot like Versailles. A court reporter takes notes on the goings-on, some of which are scandalous.

In the grand park a cluster of poised teadrinkers can’t contain themselves when a worm emerges from the grass. Utterly reactive creatures, they break their silence and cluck and jump to gobble it down, afterwards quickly returning to their feigned civility.

The film is amazingly true to both chicken behaviour and the customs and foibles of the French court. In either case Freudian repression eventually explodes all over the place.

An archetypal American girl’s room, one that could have existed any time from the 1950’s on, is the setting for A Single Life by Job, Joris, and Marieke. The guitar, the bunk bed, the delivered pizza, the portable record player and 45?s, and the sunny visage on the little redhead all contribute to the cheery ambience.

A book on a stool bears the delusory title Life is Never Ending. The girl seems enviably content until someone delivers a magic 45 that somehow enables her to move back and forth quickly in time, with tragic results. The grim reaper is sometimes nearer than we think.

In Beast, by Bossmann, Grabette, Hafa, Menigot, and Ottevaere, we see an imagined episode in the Mayan myth cycle. The “beast,” who I’m guessing is Cizin, the Mayan god of death, licks the sacrificial victim, its saliva forming a golden nugget.

An observing conquistadore, a shining example of imperialism and greed, notes the nugget and plots to use his servant boy as bait to kill the beast, no doubt to profit by its magical power. As punishment for his heartless avarice, the gold seeker becomes transformed into the shiny but dead metal he worshipped.

Cargo Cult by Bastien Dubois is a profound little morality tale that I happened to have already reviewed, here. ?Nuff said.

Forever Mime, directed by Michael Visser, has both love and death in its theme. Two mimes launch a hilarious competition, complete with “invisible” flowers, for the attention of a pretty girl. The girl reveals that she prefers ghosts (and real flowers).

In the delightful Cosmic Love a giant superstore lands on a desolate planet and some pink blobs of light come in to shop and to work a little mischief. One of them flirts with the cashier, who’s immediately intrigued. She decides to go outside and slow jump around the planet’s surface for a bit (by the size of her jumps it could be the moon).

We see hilarious snippets of a guy in a suit who just sits in an office waiting for the money to reach him, disco dancing when it does.

The pink blob lover proves an ardent companion. It even expresses its love for the cashier by filling an empty space suit in an effort to resemble the kind of inamorata the girl needs. Aw.

– It’s authentic, original, and delightful.
– It provides respite from a sick and cruel world, a respite enabling me to renew myself for a return to mindful artistic endeavor.
– It inspires an awareness of the sanctity of creation.
– It displays an engagement with and compassionate response to suffering.
– It makes me appreciate that life is a complex and rare phenomena, making living a unique opportunity.