Columns
The Voice
In Conversation with Steve Bell 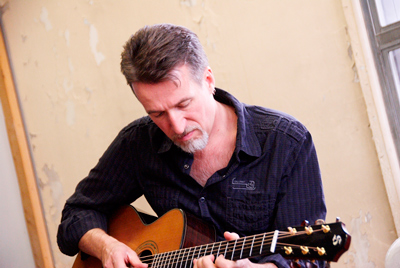 Steve Bell is a singer-songwriter, guitarist, and record producer from Winnipeg, Manitoba. After years of working with other artists, in 1989 he experienced a spiritual awakening, after which he created his own label?Signpost Music?for which he recorded fifteen solo albums. He’s now marking the 25th anniversary of Signpost with a multi-disk recording project, a tour of Canada. A feature-length documentary is now being made about his life and career. He’s won many awards, including two Junos. Recently he took the time to answer Wanda Waterman’s questions about music, spirituality, and his latest recording project, Pilgrimage.

Which elements in your childhood and early years pointed you toward music?
My mother was, and is, a great musician. She taught us kids to sing and we toured around as a family gospel band from the mid-sixties to the mid-seventies.

Often in the evenings, my mom would sit down to the piano after her children went to bed and she would play for hours. She struggled a lot with anxiety and depression, and music was one way she coped. I would drift in and out of sleep, bathed in melodies (hymns, classics, Gershwin?). I suppose one could say that melody is my mother-tongue.

Which elements pointed you toward the kind of music that expresses and celebrates spirituality?
I’ve had a keen spiritual awareness for as long as I have memory. The ominous mystery of God has been a relentless “presence” in my life. And though I have never made a conscious commitment to writing about spiritual matters, it keeps coming up in songs simply because it dominates my horizon.

What is it about your character and background that makes it possible for you to devote so much time and energy to music and to communicating your deepest awareness?
I think you’ll find with most artists that the work we do is work we’re internally compelled to do. I’m not so sure It’s a matter of character; I think It’s a matter of compulsion.

Having said that, things have worked out; I have terrific staff who can take care of much of the practical details of a music business, which allows me lots of couch time to read, reflect, and respond. I’m very blessed that way.

What was your most beneficial educational experience? What or who in your training had the most?and best?influence on you, as a musician, a composer, and a human being?
I’ve told this story often, but never tire of the telling. My father was a prison chaplain when I was a boy. The inmates would use the chapel on Saturday afternoons to have jam sessions. When they found out I wanted to learn to play, I was invited into their circle and I spent many a happy Saturday afternoon learning my craft from federal prisoners.

This unexpected source of gift has profoundly shaped my view of humanity: that each, no matter what state in life, can conduit the gifts of God for the sake of others. I have since put out 18 albums and travelled the world over, in part because Canada’s most unwanted men invested in me when I was a boy.