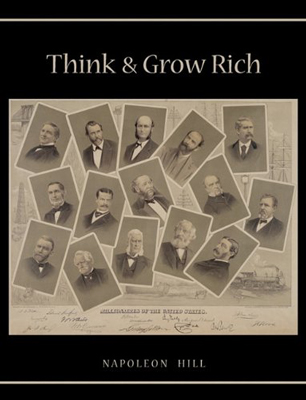 With a copyright extending back to 1960, Think & Grow Rich by Napoleon Hill proves to be an indelible, timeless source of wisdom. Drawing from influences that seem to include a mishmash of Hinduism, Fordism, and new age spirituality, the book also appears to be a predecessor of some of the ideation behind epic modern-day books such as Good to Great and The Secret.

Starting from the assumption that anyone is capable of achieving great wealth, Napoleon Hill documents what he perceives as the foundational thoughts and desires of people who accumulate great riches.

Desire
According to Hill (1960), one’s object of desire must be accompanied by a single-minded focus, wherein there is no possibility of retreat, alibi, or excuse. The desire must not be directed toward an easy way out (Hill, 1960).

The entire future must be staked on that particular goal; desire, when combined with planning and persistence, is much sounder than merely wishing for the object of desire (Hill, 1960).

As delineated by Hill (1960), the six ways to working toward that object of desire are: first, plan what dollar amount you wish to acquire; second, determine what you intend to invest of yourself for the attainment of that desire; third, determine a date upon which you wish to acquire object of desire; fourth, map out a plan; fifth, put all of the above in writing; and lastly, read aloud once in the morning and once at night your written plan.

He also exhorts the reader to acknowledge that the attainment of the object of desire does not require education nor immeasurable sacrifice. After all, says Hill (1960), what pay rate you want from life is what you’ll ultimately get. In the end, the word “impossible” does not really exist, and to you, neither should the word “failure”, as each handicap has the potential to be converted into an equivalent asset (Hill, 1960).

Faith
Faith involves, according to Hill (1960), affirmations of success to the subconscious mind, which he gives the moniker “auto-suggestion.” It is essential to repeat these affirmations with a firm belief that you will achieve your goal, augmented with an emotional attachment (Hill, 1960). In order to foster faith, all negative emotions must be eliminated, replaced by positive emotional responses (Hill, 1960). Faith combined with prayer gives you access to what Hill (1960) characterizes as “Infinite Intelligence,” wherein faith is the product of thought vibrations directed toward the spiritual.

Hill (1960) also advises that if you write out your big goal or purpose, memorize and repeat it, the thoughts will be received by your subconscious mind. For the manifestation of that thought to occur it is important to act persistently toward your goal, spend time concentrating on the person you wish to become, act confidently, and write out goals (Hill, 1960). With that in mind, Hill (1960) warns that faith must be used toward positive works that benefit humanity as those works that are destructive or negative in nature can lead to suicide and other detriments.

Autosuggestion
Autosuggestion is the act of voluntarily creating dominant thoughts in the subconscious mind (Hill, 1960). As Hill (1960) prescribes, read your written plan twice daily, mixing the read with emotional attachment, so as to work with your subconscious mind. Believe, says Hill (1960) that you invariably must obtain the money you visualize, and visualize yourself providing, in the best possible manner, services and goods for the money you wish to receive.

Specialized Knowledge
Where education fails, states Hill (1960), is in teaching knowledge without practical application. The educated person is not necessarily the one with the most degrees, but rather, the one who is able to readily attain his or her object of desire without infringing on anyone’s rights (Hill, 1960). Plus, you don’t need vast education if you surround yourself with advisors (Hill, 1960). Without the privilege of a team of advisors, you can be reassured that specialized knowledge is cheap to purchase, either through the experience/education of yourself or those you consult with, or through colleges, universities, libraries, and night school or home study courses (Hill, 1960).

Hill (1960) outlines how learning should be lifelong?wherein you are never too old to return to school?and institutional education is merely a means of teaching you how to acquire practical knowledge for your purposes.

Imagination
From Hill’s (1960) perspective, there are two kinds of imagination: (1) synthetic imagination, which arranges known information in new ways and is the primary route for gaining wealth, and (2) creative imagination, which enables you to communicate subconsciously with others in order to receive inspiration. One component of Hill’s investment into the concept of imagination is the view that ideas can be sold where goods cannot?imagination is a fertile, potent source of wealth.

Organized Planning
In creating a plan, Hill (1960) advises you to come up with a team for mapping out a decisive plan; ensure you are able to offer something in return to your team, such as financial compensation; meet with team at least twice a week until plan gets perfected; and be in perfect harmony with the team. He says it is important to ensure the plan is faultless and that everyone on the team has something worthwhile to offer.

Traits of an effective leader include self-confidence, courage, fairness, justice, firmness in decision, practical plans, over-achieving, empathy, expertise, and cooperation (Hill, 1960). Leadership requires the sympathy of followers in order to last, as leadership brought on by brute force is short-lived (Hill, 1960). Leaders should never be too busy to deal with pressing matters, should humble themselves to do things others wouldn’t care to do, should be paid for what they do with knowledge and not just for the possession of knowledge in itself, should never concern themselves with the possibility of underlings taking over their position, should always pass on glory to others, should not be prone to outbursts, and should be loyal to colleagues, higher-ups, and subordinates alike (Hill, 1960).

Decision
With respect to decisions, Hill (1960) posits that a lack of firm decision-making is a fundamental reason for failure, whereby procrastination is an enemy. He advises to not arrive at decisions slowly and change them quickly. Instead, he argues that reaching decisions quickly and changing them slowly is the best course of direction?and to not, by any means, be influenced by the opinions of others. He states that you should choose only those in complete harmony with your purpose for decision-making correspondence. Also, Hill (1960) warns you to not talk too much, as envious people may attempt to thwart your spoken plans or put your plans into operation before you do.

Persistence
Willpower, in addition to desire, is the foundation of persistence, according to Hill (1960). Although in some cases persistence can arise from necessity, you can also train yourself in the art of persistence by doing the following: (1) know your goal, (2) be imbued with desire, (3) have self-belief, (4) create a sound plan, (5) be empathic and harmonious with others, (6) concentrate on putting plan into action, and (7) make your goal-seeking endeavours habitual; furthermore, don’t seek quick riches, such as through the means of gambling (Hill, 1960).

The Brain / The Sixth Sense
According to Hill, emotion must be injected into the subconscious mind through the following: desire, faith, joy, sex, enthusiasm, romance, and hope. The following emotions must be avoided at all costs: fear, jealousy, hatred, revenge, greed, superstition, and anger (Hill, 1960). The subconscious mind is able to communicate with the Infinite Intelligence like a radio communication from a transmitter to a receiver. The subconscious mind takes what the Infinite Intelligence returns and translates it into some type of solution or answer (Hill, 1960). This communication with Infinite Intelligence can be thought of as a sixth sense; this sixth sense can warn you of impending dangers and notify you of pending opportunities–not unlike a “guardian angel” (Hill, 1960).

With a team of like-minded individuals, geared toward full harmony with your purpose, the thought vibrations of each mind can multiply and offer to each individual more thought impulses than he or she would have alone (Hill, 1960). Also, actively seeking inspiration from intellectual giants of the past or present is another potential source of infinite knowledge (Hill, 1960).

So, do as Hill says, and get busy drafting and reciting that plan to realize great wealth.

Fly on the Wall—Love for Learning

On the Hill – Culture Shock

From Where I Sit – Money Matters