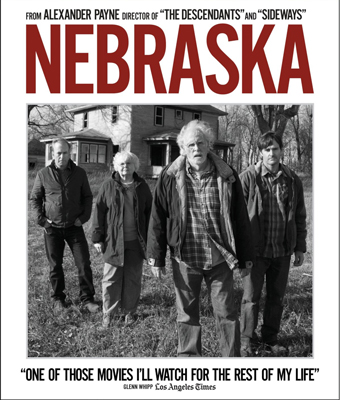 DAVID: Hey, Dad, how about we go see Mount Rushmore?
WOODROW: We don’t have time to see that!
DAVID: It’s just 30 minutes off the interstate. And we’re right here.
WOODROW: It’s just a bunch of rocks!
– Dialogue from Nebraska

Woody wants to go to Nebraska to pick up his million dollars in winnings. His family knows the ?sweepstakes? he’s supposedly won is just a scheme to get people to buy magazines, but Woody is going to Nebraska come Hell or high water.

His son David sells stereo equipment in a working class town in a recession economy (you do the math). He’s a handsome guy with an obese, plain, and surly ex-girlfriend he’s begging to come back to live with him. She won’t come back unless they marry, and She’s not even sure she wants to marry him.

David looks around him and realizes that driving his father to Nebraska makes about as much sense as anything else in his meaningless life, so he decides to call in sick and hit the road.

Woodrow T. Grant is an aging mechanic who rationalizes his drinking problem (?beer isn’t drinking!?) and admits that he never really loved his wife and hadn’t especially wanted children. His name contains the first name of one American president and the last name of another (if we’re to believe Garrison Keillor, such hopefully pretentious names are fairly typical of rural Midwestern families of Scandinavian descent). He is, like his ilk, trapped in the mundane and longing for something new, occasionally intoxicated by gleams of the transcendent between bouts of intoxication by beer.

His wife is one of the most foul-mouthed mothers in film history; the film asks us to consider whether She’s an abusive psychopath or simply a woman at the end of her rope dealing with a husband who seems to be growing ever more useless and demented each day.

As if to prove Freud right in his theory of the proximity of sexual to death urges, Mother just gets cruder and cruder, finally lifting her skirt over a dead boyfriend’s grave to show him what he missed out on.

Yes, It’s all a big downer, but the new romanticism must include realism, and the grittier the better. Alexander Payne fills the order with this achingly unglamourous portrayal of a midwestern father and son road trip.

The film presents mostly just the seamy side of small town life, and if you’ve ever lived in a small town some of the scenes will seem annoyingly familiar. This is no bucolic pastorale, and these are neither kindly peasants nor simple farm folk. Their mean little hearts harbour no warm fuzzy feelings about America despite the fact that their votes and apathy have made America what it is. they’re petty, narrow-minded, graspingly greedy folks who work hard but lack initiative. There’s no spiritual dimension to them although they appear to be religious in name at least; these stalwart Catholics and Lutherans see their religious affiliations as political divides more than calls to higher ground.

The lowest point of the underbelly of rural middle America with all its bitterness and inertia is represented by David’s two loser cousins (played brilliantly by Devin Ratray and Tim Driscoll). The actors really need to be commended on a superlative portrayal of n?er-do-wells practically rotted out with envy, laziness, and moral depravity.

The sometimes deliberately wooden, amateurish acting is reminiscent of sixties educational films created by social workers to explain interpersonal family dynamics, or the films they showed us in school to help make us better citizens.

The scenery is like an extra character. Even in black and white the sky is an amazing spectacle and a potent symbol of the freedom to which everyone seems to be aspiring but is woefully ill equipped to achieve. The slow transformation of the rolling hills of Montana into Nebraska prairie is a drama worth watching unfold, and there’s one oddly lovely scene in which groups of bikers slowly pass the car.

Juxtapositions of signs are a motif in Nebraska?a newspaper office called ?The Hawthorn Republican,? a misspelled loan offer, and a store that boasts ?Monster Tan? are jarring reminders that this was the America that voted in the younger Bush.

In most hero journeys we don’t know our own misery until we catch a glimpse of the possibilities beyond it, and these possibilities put our pain in sharp relief. The sweepstakes letter telling him that he’s a winner has shown him a way out of his despair and so sets him on one last hero’s journey. He’d sooner die than pass up this chance.

Woody chooses to believe in the letter because believing in it makes him a better man, gives him a purpose, sets him on a hero quest for the first time. In contrast, his friend, Ed Pegram, is punished not just for denying the existence of a hero quest, but also because life without a hero’s journey is not worth living.

Student nominated, but I chose this one because of how it exemplifies the artistic critique of a film that the Gregor’s Bed column seeks to bring