Articles
The Voice
Keeping it Short 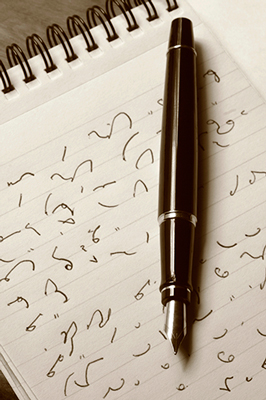 Whatever happened to the art of writing shorthand? Has it gone the way of the adding machine, hand-sewn clothes, and film cameras?

When I attended high school a million years ago, shorthand was offered as a full-credit course. (I should also mention that there was a full-credit course in using adding machines?now known as desktop calculators?as well as courses in what was called “home economics,” which covered sewing and basic cooking.)

Shorthand, for those too young to know or too old to remember, is a method of writing that uses symbols or abbreviations in place of letters, words, or phrases. The idea is that often-used words or common letter combinations can be replaced with a single symbol. Further, in traditional shorthand a quick-to-write symbol replaces each letter of the alphabet, eliminating unnecessary pen strokes.

Such rapid writing was once commonly used by secretaries, court reporters, and journalists. These rapid notes were temporary aids to be later transcribed in full.

Shorthand has been around for centuries. It dates back at least to the 4th century BC in Ancient Greece. Various forms were devised over the years and continued to be developed right into the 20th century. When I attended high school, the Pitman system of shorthand?already 100 years old?was taught; it was later supplanted by the Gregg system. I learned neither because I opted for the adding machine course.

Computers have largely eliminated the need for shorthand and today there are few, if any, high schools which have shorthand on the curriculum. Secretaries (who are seldom called secretaries these days) no longer take dictation because many executives tap out their correspondence on their own computer. Those who don’t type their own use a voice recorder to dictate letters. Similarly, journalists now use voice recorders in most situations. Although reviewing a taped interview takes longer than reviewing shorthand notes, the saved recording protects journalists from accusations of misquoting, an occupational hazard and potential legal tussle.

For myself, there are still times when I have to take notes quickly and by hand: lectures, both educational and cultural; meetings in which the task of minute-taking falls to me; and telephone interviews when I’m trying to get accurate and timely information for an article.

In the struggle of trying to simultaneously listen and write, often neither gets done well. Then I strain later to read my hastily scrawled notes and make sense out of what I wrote and what I remember hearing.

Shorthand would surely be a boon in these situations, and others. Taking notes during or immediately following a legal or medical consultation, for example, instead of struggling later to remember the advice and instructions.

In my recent attempts to learn shorthand, however, I found myself thwarted. Shorthand has fallen so far out of fashion, there is little information available. My local library has not one book on any method. An inter-library loan search of public libraries across Ontario turned up a few crusty copies of Pitman shorthand and a smattering of others?and this is to serve a province of over 13 million. Book retailers are similarly under-stocked. Even the AU Library is bereft of rapid writing texts.

In a sort of stenographic tyranny of the majority, the fact that most people don’t use shorthand most of the time is hampering some people from using it some of the time. I am encouraged?slightly?by this 2014 article in The Atlantic, in which a journalist describes how he still uses Gregg shorthand (even though he also has a Sky wifi smartpen, a James Bond-quality piece which is also a voice recorder and a camera.)

Could be it that shorthand has reached the end of its 2500-year run? Or will it languish into near-extinction only to enjoy a resurgence, like knitting. I’m encouraged by the ongoing availability of steno pads, those spiral-bound notebooks with the vertical line down the centre. That vertical line? It exists only for shorthand.

Next week’s article takes a look at two disparate forms of shorthand: one a traditional slashes and squiggles type, and the other a modern system of abbreviation.