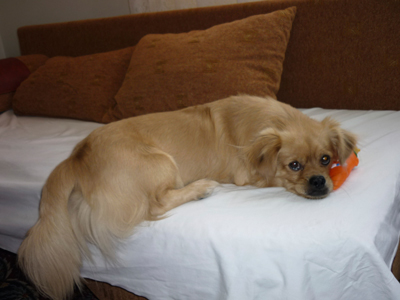 Every Sunday morning, without fail, my husband and I drove to our local Humane Society and walked the dogs. I walked the small ones and Ed walked the larger ones. Some days all the cages were full and other days there would be only one or two lonely, scraggly little dogs. Little did I know that one Sunday morning my life would be changed forever.

It was Labor Day weekend and, after we completed walking the dogs and were ready to go home, one of the staff members came rushing towards us. “Barb, I have to ask you guys a big favor. I have a little pup that someone dropped off and it’s too young to leave at the shelter overnight, and tomorrow is a holiday so we’ll only be coming in briefly to feed and clean cages. Would you and Ed be able to shelter this pup for a few days?” I looked at Ed and we both agreed. She ran to the back and brought out the cutest little blonde pup I had ever seen. I held her while Michelle handed Ed the food along with a bed and blanket. We headed home with the hope that our dog and cat would accept this pup without too much chaos; they did readily.

As we arrived home we soon discovered the pup was covered in fleas! Also, when I took her out to pee I thought she had eaten spaghetti, as long white strings were exiting her back end, but on a closer look I realized she was infested with worms. I was almost sick to my stomach. This poor little pup. And there was nothing we could do until Tuesday, as no one was at the shelter. We tried unsuccessfully to keep the pup away from our pets, but they were all too curious. Fleas were everywhere! I thought, “Well it’s only a couple of days. We’ll get through this.” Unfortunately, overnight the pup started vomiting and having bloody diarrhea. Oh my goodness, what else can happen!

We had no choice but to bring her into the emergency clinic. She was diagnosed with the parvo virus, which they explained was a very serious, life-threatening condition, and she needed to be started on IV fluids immediately. The next day we called the Humane Society and told them the situation. Michelle asked if we could bring her back as they couldn’t afford to keep her at the clinic and they would be able to hydrate her at the shelter. When we went to the clinic to pick her up, they advised us not to take her out, as she needed to stay there because the shelter did not have the proper equipment and she may become seriously dehydrated. I looked at my husband; our hearts were breaking for this poor little abandoned pup. We decided we would leave her there and ultimately be responsible for the vet bill.

When we arrived the next day, she looked much better and we decided to return her to the shelter. Ed and I knew we were getting attached to this sick little girl. We brought her back to the Humane Society where they put her in an isolation cage as she was contagious. Michelle told us we could visit her whenever we wanted. Consequently, we visited her daily?for a week. Each day as she was getting stronger we were becoming more attached. One day Michelle told us they would be able to put her up for adoption soon. My heart sank! I was so drawn to this little girl, and I knew Ed was too. We went home and discussed what to do.

The next day we arrived at the shelter to pick up the new addition to our family. “Rusty” was a sweet, wild, crazy pup, who overcame many challenges. After surviving the life threatening parvo virus, Rusty developed an ongoing vaginal infection, then a dislocated knee cap for which she needed surgery, and then mange, a skin condition that requires dips into a disinfecting solution once a week for six weeks. And this all occurred within the first year of her life. Ed and I began to believe she was invincible.

Throughout our years with Rusty, she became an irreplaceable member of our family. She knew our routines and could read our emotions by body language or tone of voice. She was a constant companion to both of us, but gravitated more to Ed. When Ed was diagnosed with terminal cancer, Rusty must have sensed it. She stayed by Ed’s side as he became sicker and sicker from the chemo and radiation treatments. So much of our focus had been on Ed’s illness that we overlooked a growing weakness in Rusty until, one day, she could not stand up. We rushed her to the vet to hear the unfortunate news that Rusty had cancer of the spleen and would most likely die within weeks. The vet recommended we put her down, as she would suffer tremendously with this fast growing cancer.

Ed and I discussed it, and we knew we did not want Rusty to suffer any longer. We told the vet our decision and he prepared a room so Ed and I could be with Rusty during her final moments. I could feel anxiety rising within myself as I had never been with anyone at the time of death. Throughout my childhood, my dogs just disappeared when they became ill or old. Regrettably, I was not able to be with my parents as they passed.

We entered the room and Rusty was lying on a big pillow, looking very peaceful, an IV was in her front leg. The vet told us when the injection would take place and when she would pass. Two small yelps and then Rusty was gone. Ed and I welled up with tears. As we looked at each other little did we know that this was Rusty’s last gift to us. Six months later, as I held my husband’s hand, I appreciated the gift Rusty had given me. In some small way Rusty had helped me to say good-bye to my husband and accept my unavoidable destiny.

How to SUP with your Pup