Articles
The Voice
Lichen On Logs 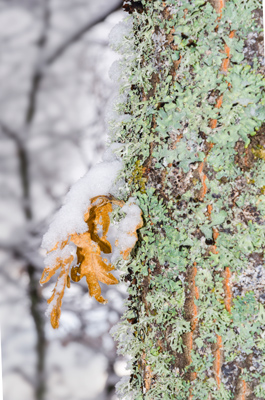 This weekend I was taking some pictures of lichen on logs protruding through the snow around my frozen local reservoir. My photo session was interrupted when I encountered a friendly couple who were taking videos of their family dog doing tricks. Seeing me, the dog stopped in its tracks and bolted in my direction, barking furiously. I’d owned a part-Rottweiler like this dog before and didn’t panic or take excessive precautions. It occurred to me, though, to consider what the viewers of the video the couple were making would see? They’d turned off the camera to chase down their pooch, whodunnits’d not responded to their calls that it return to them at once. As such, the ?scene? was cut. Our respective videos and photos both halted; the perspectives we were conveying were held in suspension. I thought of how much goes into the production of any viewpoint.

Later that day I was thinking about the Stanley Kubrick film The Shining. Probably most folks recall the horrifying moment where Jack Nicholson, playing Jack Torrance, busts through the door with his axe and exclaims “Here’s Johnny!” Yet we must also remember the opening scene, where the family drives out to the lodge where Torrance is to be caretaker over the winter while he writes the novel of his dreams. The view from above the family’s red Volkswagen Beetle provides the audience with an eerie and voyeuristic feel. We are looking down and into a family’s life, much as the world around us at times looks into our own. Directors know how to create a desired feeling with camera angles and cinematography. Right from the beginning, The Shining provides the audience with a crucial sense of distance from the main characters; it is like the family is from a different place or time.

Movies produce a perspective of the director’s choice in the same way as our school essays allow us to convey our own window onto the world. A recent documentary about The Shining called Room 237 delves into this and reminds us that visuals are subjective rather than objective (Room 237, 2013). Never does a person reach a viewpoint, be it of a gorgeous mountain range or the truth in one’s heart, without some sort of productive effort. Like the vanishing point in a painting, where parallel lines meet on the horizon, the eye and mind are drawn to certain truths as a result of careful effort. To sound objective, essayists are implored to avoid using ?I? and to appear impartial even while making their point.

The production of perspective is crucial. In the case of essay-writing, the reader is expected to believe that the thesis statement is objective even though its creation occurs from the hand of a subjective human being. The ghost of the Bible’s first Commandment is invoked, that ?thou must have no Gods before me? (ie before the truth being conveyed) even though the precise visage of the ?god? (ie the author) remains unknown. Of vital significance is the fact that Moses, who was the bearer of the commandments to the people of Israel, was allowed to see God’s face. As students in an academic context, we are asked to convince the reader that what we are saying is objectively valid, even while we claim that we are not the creators of the viewpoint we project as true.

Jacques Lacan once wrote that animals do not cover up their tracks the way humans like the boy (Danny Torrance, played by Danny Lloyd) does at the end of the Shining (Kubrick, 1980) . To be truly aware of the subjective nature of the seemingly objective Truth that we convey is to be aware of the ability to elide our own role in the transformation of our opinions into certainties. This may have significance in terms of the beloved Christian poem ?Footprints?, for instance. The beautiful poem concludes with the statement that at some moments there appears on the beach only a single trail of footprints, and that “it was then that I carried you” (Stevenson, 1939). Yet, in nature, when two tracks become one it is usually because a predator has captured its prey. Perhaps faith (and here I’m talking about faith in the possibility of a truly objective point of view) is about allowing oneself to be carried away by one’s own certainty in the beliefs one holds. In regards to the natural sciences, the term ?scientism? refers to an unwavering certainty that the empirical results of the scientific method are the best way to arrive at Truth. we’re taught as students to present our perspectives as fact, even if at times our feet must leave the ground of reality.

A point of view, therefore, is a carefully constructed process. It has a methodology. We directly ask our professor to believe in what we are saying even while we claim that any reasonable person would agree (or at least accept the validity) of the truth of our claims.

The man and wife making home videos of their dog were illustrating their life. I felt awed and fascinated that when I arrived on the scene (on set, so to speak) I, in a way, encountered what happens when the production phase is paused. While putting the camera down the man yelled for his wife to please run and grab the dog. We distance education students know how much work goes into essay-writing in terms of presenting a perspective within the backstage realities of the rest of our working and family lives. Sometimes we just have to stop and call off the dogs (as it were) or watch some mindless television. A good assignment feels both personally resonant and academically sound yet, almost invariably, the mundane-yet-invaluable world of pets, kids, and dishes remains external to the final product. Could it be otherwise; could an essay represent every facet of a topic, including the behind-the-scenes realities of its production?

Jorges Luis Borges quoted a 1658 mythic narrative by the Spanish writer Suarez Miranda who described a map of the world that was so explicitly precise, so objective, that it literally replaced that which it claimed to represent (Borges, 1658). Imagine if Google Earth was updated to the nanosecond and every act and movement of every living and dead thing on the planet were visible at the exact moment they shifted. The representation would literally become that which appears and, in a sense, the world would cease to exist. Objectivity, then, is as impossible as a map that truly shows every detail of reality. Yet, for the purposes of parsimony (not to mention to tell the story we want to, whether of peaceful lichen or blissful marital relations) we invariably edit and arrange the selves and stories we represent. As much fun as it is to imagine total honesty and clarity, would we really like what we saw?

For the purposes of making our points clear in an academic setting, we students would probably be pretty disenchanted with the whole project of our education if we did not learn to somehow distill down our myriad influences and thoughts, desires, and ideas into a more palatable, not to mention readable, form. We can tweet every detail of our life and, if we choose, report on every microcosmic aspect of our existence, yet the act of portrayal allows us to paint a picture that conveys what matters most to us, and what seems most true in the context of the topic at hand. Objectivity invariably rests upon a sifting process, a special skill that we hope to attain through our education.

As post-secondary students we are in an enviable position. Unlike workers who have limited or non-existent freedom of speech in their workplaces, not to mention limited opportunities for creativity outside of ?problem solving? according to the exigencies of the job site, we get to research, investigate, and challenge the course material and ourselves. When we choose to unwind from work we have the option of doing our coursework, such that we instigate ourselves to think critically about our surroundings and to produce a viewpoint that creates our own omniscient (ie. God-like) perspective upon the world. After all, to shine light on something is not only to reveal facets of its character but also, as Derrida aptly put it, to recognize “the brilliance of the beam…the ubiquitous dispersion which…disperses the better to invade everything!” (p. 293). By research and study, we come to an understanding of the world which matches our own image of it. In a sense, creativity and interpretation are about remaking an object in our own image. Just as Jack Nicholson’s character is reminded that “you’ve always been the caretaker”, (Kubrick) we Athabasca students are the caretakers of our own education and the meaning that it provides to us and those around us.

From Where I Sit – Taking Time to Savour