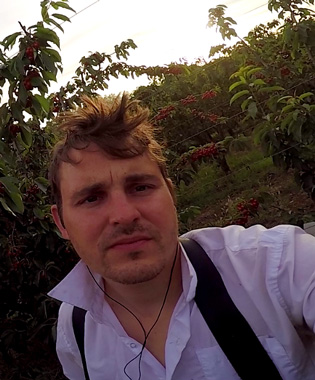 Philip Kirkbride is an AU student from Ontario who is balancing studies with world travel. He’s enrolled in the Bachelor of Professional Communications program.

Philip is known to The Voice Magazine readers as “The Travelling Student.” We recently caught up with Philip in Australia and interviewed him by e-mail about school, work, and, of course, travel.

Where are you from, and where do you currently live?
I was born and raised in London, Ontario, though I consider Waterloo Region in Ontario to be my home. I’m currently writing this at a small cherry orchard in Young, Australia. I have a working holiday visa in Australia and am slowly travelling across the country.

Describe the path that led you to AU. What was it that made you realize you wanted to go back to school, and what pushed you into the program you’ve signed up for?
My college informed everyone in my program that we were eligible to receive two years’ credit in the program at AU. Once I had a steady job I started taking classes part-time. I wanted to broaden my skills and give myself the option of applying for a masters level program later on

What do you do like to do when you’re not studying?
Of course I like travelling and writing?those two should be obvious. If I’m not reading, writing, or working, I’m probably hanging out with friends old and new. I really enjoy making people laugh, and I enjoy eating delicious food.

What are your plans for this education once you finish? How does it fit in with where you want to go?
I have a technology background but I hope a degree in communications will open up doors which allow me to take on more of a business role in future endeavours.

Who in your life had the greatest influence on your desire to learn?
Besides my parents, my grandfather, Douglas Kirkbride, was the biggest influence. No one in my family has a college or university education but my grandfather is extremely well read and travelled.

He lived in Britain as a child and saw the German warplanes flying overhead. Later he would join the British Navy, allowing him to travel across Europe. After that he immigrated to the East Coast of Canada. Having never driven a car before, he and my grandmother purchased a Volkswagen Beetle and drove all the way to Sarnia, Ontario where they raised their family.

When I was younger he had a huge basement library, and if you asked him a question about another country or history you could always expect a long and detailed answer.

Describe your experience with online learning so far. What do you like? Dislike?
I like that I can study from anywhere in the world at my own pace. At times I’ve been pressed for time because of work, and AU has allowed me to extend classes. At other times I’ve had a ton of spare time which has allowed me to finish extra class work.

One of my biggest pet peeves is the lack of education about online education. A lot of younger people in Canada get it now as most universities are offering some of their classes online. When I’m travelling abroad though some people just seem confused with the whole concept of online education.

When was the point where you wavered the most about whether it was worth it to continue your schooling, and what made you decide to keep going?
There was a point when I was extremely busy with work and questioned if it was worth it to continue my studies. The flexibility of AU in allowing me an extension really helped to encourage me to keep going when things settled down again.

What’s your most memorable AU course so far, and why?
It’s actually a class I’m taking now ECOM320: Overview of E-Commerce. I find it really interesting mainly because I have an interest in both business and technology. I was also really impressed with how up-to-date the course is; the textbook mentions a lot of events that have happened as recently as two years ago.

Describe the proudest moment in your life.
I have two moments which tie for proudest moment. The first was being flown to Amsterdam all expenses paid by BlackBerry for a technology conference at the start of 2013. The other moment was being selected to develop the BlackBerry version of a mobile app “PictureThis” which was featured in several popular news outlets including CTV.

If you were the new president of AU, what would be your first project?
I’d increase the number of classes which allow you to receive text-books in all-electronic format instead of just print. While I personally prefer paper based text-books, I think electronic formats can improve accessibility for students in remote countries who are looking to get a quality degree from a Canadian institution without leaving their home country.

If you were trapped on an island, what three things would you bring?
Sun glasses, surf board, and a lifetime supply of margaritas.

Describe one thing that distinguishes you from most other people.
The level of passion and effort I put into my endeavours.

What is the most valuable lesson you have learned in life?
This is an oldie but a goody: 80% of success is showing up.

What do you think about e-texts or the plans to make the university follow a call-centre model?
As I mentioned earlier I think e-texts are very important. That said I think we should still have the option to receive paper based textbooks.

As for the call-centre model I think it would be great if it’s done right. If I call in about a problem I’m having on an assignment and I want to call back later, I want to have the option of speaking with the same person. This is one of the most frustrating things about getting technical support over the phone if you don’t get the same person you have to explain everything over from the beginning.

How do you find communications with your course tutors?
I find it varies hugely between tutors. I have some tutors who have very few in-office hours and stand me up when I call them at a time they set for a phone call. Yet I have other tutors who are extremely helpful and will actually email me periodically to see how I’m doing.

Where has life taken you so far?
My family isn’t rich and I didn’t have high marks in high school. Despite that I worked hard in college and managed to get lucky with a lot of opportunities. I got a short-term job with my college in my field right after graduating, followed by another great job after that. Later on I started my own business, and I’m now studying at AU while I travel the world.

What (non-AU) book are you reading now?
I’m just finishing a great book called An Economist Gets Lunch by Tyler Cowen. I’m writing an article for The Voice Magazine about how some of the tips in the book have allowed me to eat well on a student budget as I’ve been travelling.

The Travelling Student – A Day Off

The Travelling Student – Landing in Sydney