(Be sure to read parts I, II, and III of this series.)

“Whenever You’re making a movie, especially when You’re writing, you always have self-doubts. I did the first location shooting in Tunisia. I didn’t get everything shot, but I had to get out of there in ten days regardless.”
– George Lucas

We stop to look at a lovely five-star hotel that now stands abandoned; tourist numbers have dropped off because of political unrest and competition from other countries. The Jasmine Revolution, which, as many have said, was not a true revolution but rather a large-scale revolt, initiated necessary changes in the country but also set the economy back by rendering Tunisia a less desirable tourist destination.

Economic growth remains stunted; continuing reports of terrorist attacks against police, politicians, and military personnel prompt foreign governments to advise extreme caution to people considering a visit to Tunisia?especially here in the south, close to the borders with Algeria and Libya.

But tourists come, nonetheless. We visit Tozeur, often referred to as the gateway to the Sahara. It’s one of the magnets for Star Wars fans because it was the location for Mos Espa on the planet Tataouine (if You’re a Star Wars fan, the rolling dunes of fine sand will look achingly familiar).

We enter the town square, where a glorious pavilion of tiny lights casts its magic in the twilight over families of locals and visiting Europeans. There’s a small brass band with fancy uniforms playing appalling sounds. The stalls surrounding the square display some of the most gorgeous handwoven textiles I’ve ever seen.

Star Wars director George Lucas said that Tunisia was the only place in the world to film the Star Wars series, making it a pilgrimage site for some of the most besotted film cult followings of all time, their infatuation with the film series compelling them to ignore the threat of Islamist fundamentalists hiding out in mountains, caves, or just beyond the borders.

Even before the revolution there were issues with neighboring countries. A sandcrawler?the large cumbersome vehicle used in Star Wars IV?provoked complaints from the Libyan government who observed it parked a little too close to their border. The Tunisian government politely requested that Lucas move it somewhere else. Naturally, he complied as quickly as he could.

After the Jasmine Revolution, Lucas was obliged to move filming of the Star Wars series to Abu Dhabi in the United Arab Emirates, which offered, in addition to a higher degree of safety, tax-free filming and a 30 percent cash-back rebate for cost of production. It was an offer he couldn’t refuse.

But I soon learn that It’s not the end of film production in Tunisia.

We eat dinner at a nice little spot in downtown Tozeur. I hear English wafting from the next table, sounding especially dulcet because It’s one of those rare times I’ve heard English spoken as a native tongue here. I can’t help but butt in and ask them where they’re from. One is from New Zealand, one from Italy, one from England, and one is British-Tunisian. They call themselves an international assembly, claiming that a Russian has just left their company. Later I surmise from eavesdropping on their discussion that they’re a film crew.

A little investigation shows that as one possible solution to its money problems the country is eager to attract more film production. It’s hard to compete with nations that offer attractive incentives to cash-strapped film budgets, but the Tunisian landscape and historical sites are unparalleled? significant contributors to the success of blockbusters and art films at home and abroad.

I’m hoping that the presence of this little film crew here is a harbinger of good things to come. I smile to myself. Maybe the world will get to see more of this gorgeous desert wonderland, even if only on screen. 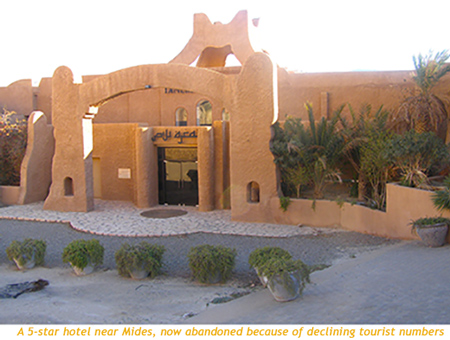 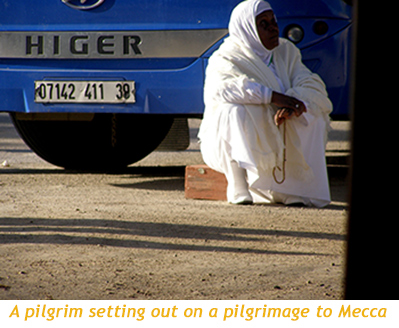