Columns
The Voice
In Conversation with The Highway, Part III

“There’s a certain type of character that you can’t help but come in contact with growing up and living in Brooklyn and Long Island. A certain mixture of moxie, heart, and a wise guy sense of humor.”
– Steve Buscemi

Daniel Tortoledo (vocals/bass), Ted MacInnes (drums/backing vocals), Adam Douglass (guitar/backing vocals), and Griffin McMahon (keys/backing vocals) make up The Highway, a New York rock quartet that dives deep into the best of rock’s roots to inspire its own original psychedelic rock. They’ve recently released the single “All You Do” as a foretaste of their upcoming second album, Enter to Exit. “All You Do” is a long, strange ride, containing the dark tale of an evil deed compelled by love. Recently all four bandmembers took the time to answer Wanda Waterman’s questions about Brooklyn as muse, and experiences musical, funny, and weird. (See Part I of this interview here and Part II here.)

What was the most mesmerizing musical experience of your life?
Adam: They all stem from this?watching the performances of great improvisers. It’s one thing to spend three months composing a piece of music that takes three minutes to play. To create three minutes of music in three minutes with no prior planning is a special skill.

Ted: I got to dress as a bunny at a Flaming Lips show in Boston in maybe 2005, and we got to go backstage and dance around in the audience, hug everybody, stage dive, etc. That might have been more of a life experience than a musical one, but the Flaming Lips were awesome. I recall Wayne Coyne saying, “You guys looked like you were having more fun than we were.” We might have overdone it a bit…

Griffin: Playing with my high school orchestra at Carnegie Hall at age fifteen made a big impact. I loved that space and we played some amazing music by Beethoven, Mahler, and the American wild man, Charles Ives. I loved the sense of weight and history in that room?it really hits you once You’re physically in that space.

Daniel: The first and most recent thing that comes to mind was on our last tour while playing in Raleigh, NC. We met some nice people, whom we’d met a week before at a Fayetteville, NC show and they took the time to drive two hours north to catch our show again; I thought that was pretty meaningful.

Has anything funny or strange happened to you in the recording studio or on the stage?
Ted: Strange things happen all the time, usually funny. One time Daniel was doing some move and he fell back onto my drumset, but luckily fell into a seated position on the bass drum and crossed his legs, like he’d meant to sit down.

Adam: On tour we were pulled over several times by law enforcement officials for inconsequential reasons, we think because our RV looks like the one from Breaking Bad. A bunch of hippies in an RV must mean they’re smuggling meth up the coast.

Griffin: Once at age 16 I was performing an organ piece by Franck for a radio broadcast when the organ bench gave way mid-performance during an intensely quiet moment. I fell off the bench and lunged full-body forward into the organ keys, and it made a big crashing sound. It definitely didn’t sound like something the composer had intended, but man did it startle that sleepy audience!

Do you feel that Brooklyn is a creatively stimulating city? Why or why not?
Daniel: I like Brooklyn, and living here can definitely help for some people, but I’ve also met some really creative people whose creativity gets crushed by the monetary pressure, which I totally understand.
Personally I think you’ve got to have something very special to offer in order to get your head above the surface and stand out in a sea of artists, bands, and any other business, just because the competition out there is pretty harsh. And even though some people in the art world don’t like the word “competition,” we’ve got to face that reality.
Competition gives me the drive and the desire to become better. No one is here to coddle or to be coddled; I learned that in Brooklyn.

Ted: I think it is. There’s a demand here for new and innovative music, but there’s always room for more talent to emerge. It’s hard to be really innovative, so, ironically, a lot of people end up copying each other trying to come across as innovative or experimental. But we really have so much here in the form of music and art, and we can either follow the trends we see emerging or come up with a counter-reaction to them, so either way?whether we like it or not?we can’t deny that It’s creatively stimulating.

Griffin: Yes?there are definitely venues and communities in Brooklyn that stimulate and foster creative work. Brooklyn really is enormous?I love that about the borough?and wildly different music and art scenes can be found throughout. I’ve met some amazing folks during my time in New York. Despite the constant battering of press and dramatic declarations of the “end of an era,” I still think New York City is a place where people create, not just re-create or romanticize about past glory days. The local indie rock scene, despite the recent closures of a slew of live music venues, still thrives and reinvents itself every day. New venues come out of the woodwork? when one shuts down by the Williamsburg waterfront, a new one crops up in Bushwick or Crown Heights. Creativity is always present, but for better or for worse, It’s constantly on the move.

(to be concluded next week) 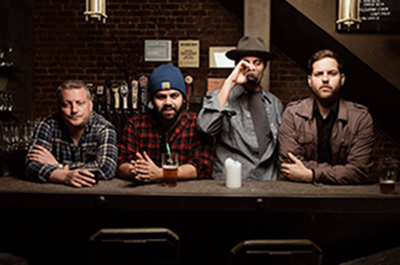 In Conversation with The Highway, Conclusion