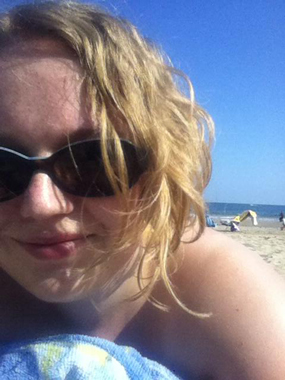 Rebecca is an AU student living in Nancy, France. Her hometown is Calgary, Alberta, and She’s been dividing her time between Canada and France for the past four years. Right now, Rebecca is taking AU courses as a visiting student, but she plans to enrol in a program.

Rebecca was recently interviewed by The Voice Magazine about school, size acceptance, and the amazing functionality of the brain.

Describe the path that led you to AU.
I was originally at Mount Royal University in Calgary. When I moved to France, I wanted to keep going with my studies. AU was a convenient option for me.

What do you do like to do when You’re not studying?
While I’m in France, I like going for walks. The cities are compact, the buildings are gorgeous here, and there’s always something interesting to see. In Canada, the spaces are vast so walking isn’t the same. I often spend free time going to movies.

What happens after you finish your education?
I’m not really sure. When I was studying in Canada I was planning on being a psychologist, perhaps working with children. Now that I’m in France I’m not really sure what I’m going to do. I plan to stay in France so I need to re-think my goals.

One thing I need to focus on is improving my French. I’m learning more and more the longer I’m here. When I came to France, I first lived in Lyon. It’s a bigger city and it was easy to get by in English. Even if I spoke French, people would often switch over to English. Now that I’m in Nancy, English is not as widely spoken so I’m speaking more French and learning more.

Who in your life had the greatest influence on your desire to learn?
I don’t know if there was anyone originally, other than myself. Now I would say that my fiancé influences me. He’s working toward his PhD and he motivates me.

What famous person, past or present, would you like to have lunch with, and why?
My number one choice would be Linda Bacon, the author of Health at Every Size. She’s an advocate for size acceptance, and I think she’d be interesting to talk to.

Describe your experience with online learning so far. What do you like? Dislike?
Although I prefer in-class learning, I’m getting the same grades with online. It’s nice that I don’t have to take the bus an hour each way, so I can spend more of my time learning. Ultimately, It’s the flexibility.

Was there ever a point when you wavered about your education?
I didn’t begin university until I was 24 or 25. I wavered a bit when I moved to France. I’m not sure what I’ll do with my education here, so at times I’ve wondered if It’s worth the time and the money.

What’s your most memorable AU course so far, and why?
Cognitive Psychology, PSYC 355. I just find it amazing all the things your brain can do. We take so much for granted but when you think about it, It’s truly amazing.

Describe the proudest moment in your life.
It was being accepted into university. I was a troubled teen and didn’t do well at school. Going to university was a big accomplishment for me.

What have you given up to go to AU that you regret the most? Was it worth it?
Well, I gave up a job, but I was ready to move on anyway. Really, I’ve gained by going to AU.

If you were the new president of AU, what would be your first project?
Priority would be to cancel e-texts and the call-centre. I haven’t had an e-text at AU yet but I did have one at Mount Royal. I gave up on it.

Describe your favourite sound.
It would be kids laughing! I can picture them, smiling with their whole face; not a bit of self-consciousness.

If you were trapped on an island, what 3 things would you bring?
First of all, I’d want my cell phone. Not to make calls or texts, since I assume I wouldn’t be able to anyway. But I have everything on it: books, entertainment, and everything I need to occupy my time. Secondly, I’d like a comfortable pillow, and my third thing would be toothbrush and toothpaste.

Describe one thing that distinguishes you from most other people.
I’m interested in becoming a size acceptance advocate.

What is “size acceptance”?
At its most basic, I would define size acceptance as a movement that works toward ending discrimination based on body size/type.

Why is this important, and why do you want to advocate for it?
we’re bombarded with messages that tell us our bodies aren’t good enough and that we all need to work to change them. The size acceptance movement often focuses on fat bodies, but It’s an important movement for people of all body types. Everywhere you go You’re going to find messages telling you that you should be on this diet/doing that exercise program/eating these specific foods, and so on, in order to be attractive, healthy, happy, and most importantly, accepted. And if you don’t meet all of these standards, You’re probably going to face some sort of discrimination. No body type deserves to be discriminated against for any reason. Regardless of a person’s health, fitness level, or physical attractiveness, one shouldn’t be required to change anything about one’s body in order to be treated equally, and with respect.

I grew up in a family whose members were very sensitive about their weight. They were on diets or talking about going on diets?they were in a constant battle with their bodies. This had a huge impact on my attitude toward my own body. I learned that my body would never be good enough unless I reached some arbitrary weight/shape. I spent over a decade despising my body, and battling against it in increasingly extreme ways. No matter what I tried, it continued to be not good enough. I would spend nights crying about it and hating myself for it. Size acceptance has given me the ability to stop hating myself and to start focusing on things that can actually make me healthier and happier. I want everyone to have the opportunity to feel the same way.

What is the most valuable lesson you have learned in life?
I guess It’s a bit clichéd, but “hang in there.” I’ve gone through some crappy times when everything seemed hopeless. Now things are going good and I expect they will continue that way. You just never know what’s around the corner.

What do you think about e-texts or the call-centre model?
No and no!

How do you find communications with your course tutors?
I haven’t communicated a lot with my tutors. I probably should utilize them more. I just prefer to work through things on my own.

Where has life taken you so far?
Various places in Canada: Montreal, Winnipeg, Vancouver. I’ve also been to California, and Las Vegas, Nevada. In the past few years I’ve been to Venice and to Spain. And I’ve been to a whole bunch of places in France.

What (non-AU) book are you reading now?
I’m reading The Edible Woman by Margaret Atwood. I’d read one her other books and liked it, so that prompted me to pick up this one. 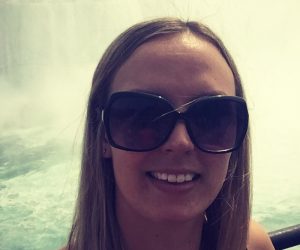