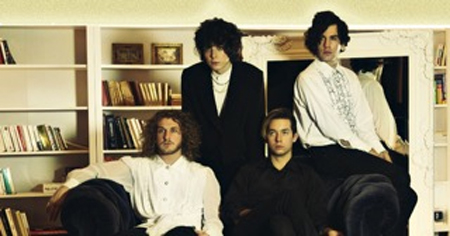 As winter draws to a close and the warm sunshine begins to seep through the snow and rain laden clouds, we find ourselves venturing outside more often to welcome the coming change of the season. And what makes that experience even more uplifting is fun and quirky music gently rolling through your ears and weaving into your soul, helping it to shake off those winter doldrums. The album Pulp is full of music that will instantly have you dancing in the sunshine.

The Seasons was formed in 2011 in Beauport, Quebec. Comprised of brothers Hubert and Julien Chiasson (vocals, guitar, and keyboards) and their friends Remi Bélanger (drums and percussion) and Samuel Renaud (bass), they’ve quickly gained popularity in Quebec. Selling out many of their shows, recently they’ve signed an album deal with Vega Musique. The band spent 2014 touring across Canada, and captured the attention of a couple of international labels, eventually leading to the band singing with BMG Right Management in France, Are in Belgium, and they are presently in negotiation with the legendary Harvest label (Capitole-EMI). Pulp is the band’s first full-length album, which was released on April 2014.

Given how their music makes me feel, I instantly fell in love with every aspect of the band. Their sound is creative, merry, and offbeat. I can’t pin them to any specific genre of music, but they are very much a combination of psychedelic rock and 60s rock, with a soul influence. The sound is similar to the later music from The Beatles, but not the same.

“Copernicus” is the second track on the album. Perhaps it is because I just learned about Nicholas Copernicus in my AU History of Psychology (PSYC375) course, but I really like this song. Brilliantly, the chorus alludes to Copernicus’s heliocentric theory (he was the first to argue that the earth revolved around the sun), and the repeating verse “I need the sun I need the sun” is something I find myself saying more during these last few days of winter. The simple music of the song lends a theme of deep contemplation on the part of the singer. The overall feeling is light and optimistic, but I can’t help but sense that there is a deeper layer to the song.

I find that the lyrics are difficult at best to make sense of. That is why I compared them to The Beatles later on in their careers, because they were also known to have ambiguous lyrics that were difficult to decipher. As well, unless you really enjoy psychedelic rock, the general tone of the album becomes tiresome by the end.

So if you need some music to help you to shake off those last of the winter blues, or want to listen to unique expression be sure to check out Pulp from The Seasons.