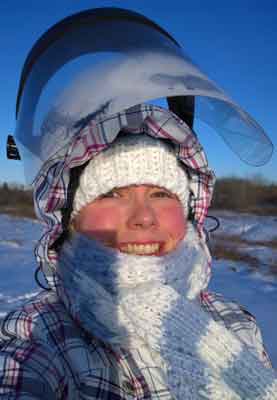 Elizabeth Manderson is an AU student living in Moncton, New Brunswick, where in February she had a 7-ft snowbank in her yard. Originally from Edmonton, Alberta, Elizabeth’s family moved to the Okanagan Valley in BC before landing in New Brunswick. Elizabeth is taking her third AU course while she figures out what path she wants her education to take.

Elizabeth was recently interviewed by The Voice Magazine about school, being outdoors, and student-to-student contact.

Describe the path that led you to AU.
I had originally started at Crandall University in Moncton. I did one year there taking basic courses but didn’t continue. I ended up getting a job but still wanted to go back to school. It was something my Mom said that got me thinking about AU. Taking one course at a time has enabled me to continue working, although taking courses while working full-time is not as easy as I thought.

Where do you work?
I work at Purolator in the accounts receivable department. I take calls from across the country and help people with their invoices?payments, corrections, credits?as well as booking pick-up and trace of courier packages. Before that, I worked at a Natural Health store, which piqued my interest in natural health

What do you do like to do when You’re not studying?
I like to be outside. I like walking and cross-country skiing. It may sound strange, but I enjoy doing housework and working around the house, too (especially, of course, when I ought to be working on school work!) I’m also into salsa dancing, and I like taking my dog, Tango, to the woods or to a dog park for a run.

What happens after you finish your education?
It depends on which path I eventually settle on. I’m interested in medical-related fields, like cardiology technician, or dietician, or pharmacy. I’ve been taking science-related courses while I figure out what to do next. My boyfriend and I might be moving to Toronto, so that may open up more opportunities and affect what I choose to do.

Who in your life had the greatest influence on your desire to learn?
Probably my parents. I was home-schooled, and they led me through a lot of learning. I’ve always had a love of reading?books stimulate learning. Other people have influenced me, too, like teachers, cousins, and my boyfriend.

What famous person, past or present, would you like to have lunch with, and why?
That could be a long list! Someone who’s really influenced my interest in the medical field is Dr. Paul Brand. In the mid-21st century he practiced in India and did a lot of work with leprosy patients. I think it would be interesting to talk with him.

Describe your experience with online learning so far. What do you like? Dislike?
I like that It’s at your own pace. Although that can be dangerous, too. While It’s nice that you can schedule your own exam day, there’s nobody making sure You’re doing the work. What I don’t like is that there’s no interaction with your peers. There’s the online forum but not enough people use it, unfortunately.

Was there ever a point when you wavered about your education?
All the time! That’s why I’m still only on my third course.

What’s your most memorable AU course so far, and why?
It was Introduction to Statistics, MATH 215. I found it interesting to learn how to find and interpret data. My other two courses, in chemistry and calculus, were much harder.

What have you given up to go to AU that you regret the most? Was it worth it?
Nothing. I think you only regret what you don’t do. I only wish that I could do better. I found calculus difficult, and I ended up paying a tutor to help me understand the material. It took longer to finish the course and it cost extra money, but it was worth it in end.

If you were the new president of AU, what would be your first project?
It would be to set up more peer involvement. Student-to-student contact is such an important aspect of learning. I think with current technology tools, like Skype, for example, there are possibilities out there, they just have to be set up and promoted.

If you could wake up tomorrow having gained any one quality or ability, what would it be?
I’d like to gain the ability to stick with things. I don’t feel like I get enough done.

If you were trapped on an island, what 3 things would you bring?
I’d bring my boyfriend, my dog, and a pocketknife.

What is the most valuable lesson you have learned in life?
“Fear is usually your enemy.”

What do you think about e-texts or the call-centre model?
I enjoy reading a physical text, but I realize e-texts are cheaper. But since the course text is a student’s main source of information and guidance, I think there should be a choice. I had an e-text for calculus, and I ended up printing it out on paper. It seems to me that the move to e-texts is more about cutting the costs on AU’s end, which isn’t a big deal if they’re making improvements in other areas. As for call centres, I haven’t had to use them yet because I’ve had tutors will all my courses so far. I can see where students might get a quicker response through the call centre, though; tutors aren’t always prompt getting back to you.

How do you find communications with your course tutors?
Two of them were great at getting back to me. I haven’t contacted my tutors much; I probably should utilize them more.

Where has life taken you so far?
Well, my boyfriend is from South Africa, so we’ve been there to visit his family in the Cape Town area. It’s simply gorgeous. We also visited Mauritius, which is an island country east of Madagascar, Belize, and a short stop in London during the 2012 Olympics. Closer to home, I’ve been to New York and Toronto.

What (non-AU) book are you reading now?
I’m reading The Last Empress by Hannah Pakula. It’s all about the transition from Imperial rule to communism in China.

What I’ve learned About AU Students