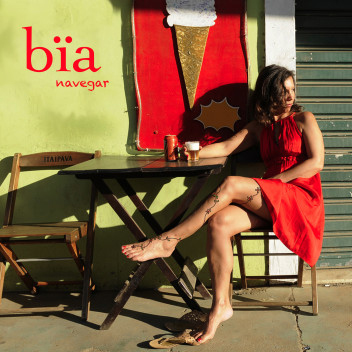 “I want the songs to be naked but their nudity is so beautiful you don’t feel there’s something missing. It’s just that you can finally listen to all those beautiful sounds. I felt I was bringing something that was very feminine, very sensual and warm. Like diving into this tropical ocean and just letting yourself float.”
– Bïa Krieger in an interview with the Montreal Gazette, March 2, 2015

The cover of this album looks so warm and inviting?Bïa sitting at an outdoor cafe in a red sundress, barefoot, sipping a cold one?that It’s hard to believe that the album was produced and released during a typically freezing Montreal winter. But after many a passport stamp, this is where the Brazilian songstress has ended up.

Over the years Brazil has produced a bevy of soft-voiced chanteuses, a refreshing break from the soulless blatting that seems to be the main dish on Idol shows the world over. Bïa is a shining star among this crowd of sweet-voiced angels, her singing tender, sincere, and masterful. Her range of achievement in the songster vein is vast: she sings in Spanish, Portugese, English, and French, and her repertoire embraces Afro Brazil, bossa nova, pop, MPB (Música Popular Brasileira), and samba, among other genres. But all That’s just a small fragment of her talent.

She turns out to be creative powerhouse, writing songs (most of the tracks on this album are original compositions), working on the radio (She’s often heard on the CBC’s French language stations), and penning a novel?Les Révolutions de Marina?about Brazil’s years of dictatorship. She made a brief appearance in Hazards or Coincidences, a film by Claude Lelouche, for which she also sang the theme song.

When she was three, Bïa and her family escaped the authoritarian military government that ruled Brazil from 1964 until 1985, fleeing first to Chile, then to Peru, and then to Portugal. Bïa remained an exile until the age of 12. She went back to Brazil in 1980 to finish her schooling and start university. She left again to explore Europe, finally settling in Paris, where she launched her music career. She now lives in Montreal.

On Navegar (Portugese for “navigate”) her tender loving voice is accompanied by a minimal but significant instrumentation that showcases the purity of the lyrics and their delivery.

Bïa sings the most evocative and meaningful version of “Eleanor Rigby” I’ve ever heard. She says that It’s one of her favourite songs, but It’s clear that she had an original idea to bring to its interpretation, which was to make it sound much darker, more ominous, and ironic than was the original Beatles version, an interpretation no doubt influenced by her own years in exile. Her accent in English is just noticeable enough to add charm and just subtle enough to sound genuine and sophisticated.

Other high points are her cover of the classic “Besame Mucho,” in which the imploring is done with a shy intensity, and her original composition, “Risada” (“laugh” in Portugese).

While I was listening to Navegar, my parakeet Zizou would sing along happily, shrieking in annoyance when the music stopped. Zizou being a bird of discriminating taste, I feel my own judgment confirmed.

Navegar manifests five of the Mindful Bard’s criteria for music well worth a listen.

– It’s authentic, original, and delightful.
– It provides respite from a sick and cruel world, a respite enabling me to renew myself for a return to mindful artistic endeavor.
– It inspires an awareness of the sanctity of creation.
– It displays an engagement with and compassionate response to suffering.
– It makes me appreciate that life is a complex and rare phenomena, making living a unique opportunity.