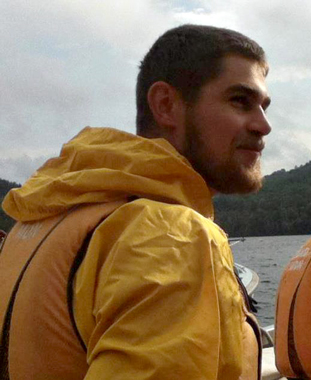 Evan Schmidt is an AU student living in Vaudreuil, Quebec, which is west of Montreal. Evan began taking AU courses at age 14. He is currently in the Management Applications certificate program, and will soon be working on a 4-year Bachelor of Management degree, with a marketing major.

Evan was recently interviewed by The Voice Magazine about school, military life, and the value of a positive attitude.

Describe the path that led you to AU.
My mother discovered AU originally. She encouraged me to apply for early admission to AU at age 14. I was being home-schooled because I was terribly bored at regular school. With home-schooling, we were able to develop our own rhythm. Initially, I took university courses on the side while still taking high-school-level courses. Now, I’m studying with AU full-time. Starting at AU so young was an interesting experience. My first course was BIOL 204, Principles of Biology I. It was a hard course to take at that age?it was such a different learning environment. While I did well in that course, I’ve since found business courses more to my liking.

What do you do like to do when You’re not studying?
I enjoying playing music. I play a few instruments; one is the euphonium, which is a baritone-voiced brass instrument. I’m involved with both the air and sea cadets as a band instructor. And I also serve with the military in the reserves.

What happens after you finish your education?
After I’m done, I’m looking at going into the military full-time. This spring, I have a 3-month training course in BC with the reserves. That should give me an idea of how well I’ll enjoy military life.

Who in your life had the greatest influence on your desire to learn?
My mom! In addition to me, I have two younger sisters and one younger brother who are home-schooled. We have a computer room set up where we all have our own desks. I’m still living at home, so my Mom still likes to keep tabs on my schooling. Although It’s not really necessary, It’s kind of inevitable.

What famous person, past or present, would you like to have lunch with, and why?
I think it would be Oscar Peterson, who was a famous pianist from the Montreal area. He’s seen a few things, like how much music has evolved since he first started out. I think he’d be an interesting person with a unique perspective.

Describe your experience with online learning so far. What do you like? Dislike?
When I started out, most of my AU courses weren’t online. However, most of them are now and I quite enjoy it. And with the business courses we have the call centre, which works well. I find I get answers to questions quite quickly, although one time I had a bit of difficulty in getting to speak to a tutor. I’ve taken a few courses through the military, which is still developing its online courses. I find AU courses much more user-friendly.

Was there ever a point when you wavered about your education?
There was a period when I was unsure about continuing on. I was 17 or 18 and was almost finished my BGS degree. I was eager to get into the work force, but ultimately I decided to continue with AU and get a second degree.

What’s your most memorable AU course so far, and why?
It was WGST 333, Goddess Mythology, Women’s Spirituality, and Ecofeminism. It was a very different course from others I’d studied. It really changed my views on gender structure in society. It opened my mind to how society works in general with its current matriarchal/patriarchal construct. I had an excellent tutor, as well.

Describe the proudest moment of your life.
It was when I got my private pilot’s licence. I got a scholarship through the air cadets, and obtained my licence when I was 17.

What have you given up to go to AU that you regret the most? Was it worth it?
I don’t think I had to give up much, even though I’ve been taking AU courses for 10 years. I think I was really lucky. The only loss is perhaps the opportunity costs, because I’m in school instead of the workforce. But I expect when I’m finished my education my earning power will provide some pay-back for the time spent.

If you were the new president of AU, what would be your first project?
There’d be a lot, but what I would end up looking into is course transferability. AU has a lot of experience with online studies whereas other universities are just starting out with online. I think AU could team up with other universities so that there would be a streamlined process when students took an online course at one university. There should be an automatic process in place that online courses would be recognized without going through the transfer process.

If you were trapped on an island, what 3 things would you bring?
For starters, I’d want a knife; it would be useful for just about everything. This would be a Swiss Army type knife, with all the gadgets. Next I’d want some sort of container for collecting water. And finally, a solar-powered tablet computer. Presumably it would be loaded with all sorts of information?including survival tips, hopefully?so that I wouldn’t get bored.

Describe one thing that distinguishes you from most other people.
It would be my generally positive attitude. I’m always smiling and happy. I’m a laid-back person and I think my good attitude makes life more bearable.

What is the most valuable lesson you have learned in life?
“Anything is within reach, you just have to have the guts to reach for it.”

What do you think about e-texts?
E-texts are not something I particularly enjoy. While e-texts are great for searching for a particular term, I prefer a physical text. Any courses I’ve had that only offered e-texts I’ve ended up buying a physical textbook. I just can’t stand reading online.

How do you find communications with your course tutors?
Overall, very satisfying. There have been a few that take longer to respond, but overall they’ve been very good?more good than not.

Where has life taken you so far?
When I was younger I travelled to Mexico; I have an uncle who lives there. I’ve also been to Florida. I’ve been to Alberta to do training for the reserves, and I’ll soon be in BC for the same reason. I’m looking forward to visiting the west coast. I’ve been to the east coast: PEI, New Brunswick, Boston, New York. Those places are easily accessible from where I live in Quebec. And I spent two weeks in Paris once. It was interesting to compare the French spoken there to the French spoken in Quebec.

What (non-AU) book are you reading now?
I’m reading the Ice and Fire series of The Game of Thrones, by George R. R. Martin. It’s interesting to compare the books with the television series. I’ve already watched the series, now I’m reading the books to fill in the details.