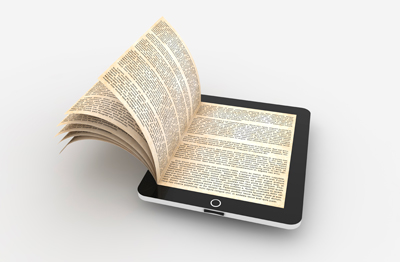 Are e-books the future? While this question has certainly been looked at in the past, the fact that Athabasca is considering bringing in an e-book option for online courses makes the issue again pertinent. For one of my current courses I was invited to participate in an Athabasca University trial project for use of e-books. I would be given access to the normal textbooks like most students but, in addition, I would have a pdf edition available for use.

About a week into the course I was sent a link using Dropbox which contained a folder containing a PDF for each chapter. One of the first things I was wondering before getting the PDF was if the text was searchable and highlight-able. Having used the Athabasca online library I was annoyed with some of the PDF files which are simply photos of pages with no text data. As it turns out all the text within the e-book is both searchable and highlight-able.

About two months into the course I ended up replacing my tablet for a new improved Samsung tablet. Like any techie with a new toy, I proceeded to use it as much as possible. Being in Australia at the time, I often found myself reading while sitting in a hammock with my tablet. The slim tablet was much more comfortable in the hammock, as well as several other situations, so I found the amount of time I spent reading was increasing.

While a large textbook is nice for diagrams and pictures, it ends up being impractical to carry around at all times. An 8-inch tablet, on the other hand, is easy to carry around and can be used for multiple purposes. If I found myself with some time to kill I could just take out the tablet and read a chapter.

As mentioned previously, all the text within the e-book is both highlight-able and searchable. In the past I often found myself searching page after page for something I’d read. On the tablet I could just do a search for a phrase and find the page in seconds. Then, once I found the reference, I could then easily copy and paste if I wanted to quote it. I used Dropbox to sync my essays between my tablet and computer so any changes would update across both.

Within a few weeks of starting to use my tablet my physical textbook was beginning to gather dust. Being in Australia at the time, I found myself making the tough decision of donating my bulky textbook to a hostel bookshelf in Cairns, Australia.

So should Athabasca University embrace e-books? I love receiving my physical books in the mail with each new AU class. So if making e-books available isn’t introduced as just a way for the university to cut physical books I’m all for it. There are so many things you can do with e-books that aren’t possible with traditional text.

Philip Kirkbride is an AU student with a penchant for travelling the globe while doing his AU courses.