Columns
The Voice
In Conversation with Tumbleweed Wanderers

Tumbleweed Wanderers deliver an original incarnation of soulful folk rock from the San Francisco Bay area. Starting out as buskers, their career was accelerated by their own creativity and artistic discipline, and they soon found themselves a popular stage presence at clubs and festivals. Their soon-to-be-released album, Realize, is a rich, multilayered tapestry of the same kind of rootsy themes, masterful strings, and the beautifully blended vocal harmonies for which the band is known, with a delightful psychedelic dimension. Recently band members Jeremy and Rob Fidel took the time to answer Wanda Waterman’s questions about childhood, busking, and the creative ambience of San Francisco.

Describe your early years.
JEREMY: I had a happy childhood. I liked school, and played guitar and soccer. My parents split up when I was seven; my mom remarried, and pretty soon I had two step-siblings and a half-brother, while I stayed an only child on my dad’s side. It was nice to have both the only child experience and the experience of being a middle child in a big family.

I was lucky to go to a good high school where I had a tightknit group of friends and meaningful relationships. But then I got to college and it was the first time I didn’t like school and found it difficult to navigate socially. I got into the open-mic scene and really wanted to see the world through playing music, so I left and started Tumbleweed Wanderers.

Was there anything in your childhood that pointed you toward the kind of music you create today?
ROB: Musically speaking, my parents? tastes had a huge influence on me. They introduced me to music like Pink Floyd and Paul Simon and turned me on to all kinds of classic rock. I didn’t really listen to anything contemporary until high school and college.

Does being in the San Francisco Bay Area make you better musicians and songwriters?
JEREMY: I don’t think so. we’re lucky to live in an area that has a rich musical history, a lot of touring acts coming through town, and a lot of great musicians and bands making interesting music, so there’s always source for inspiration, but I don’t think that makes me a better musician or songwriter.

San Francisco isn’t a music city like Los Angeles, New York, Nashville, New Orleans, or Austin. It’s not as cutthroat, which I think is helpful for building a local following and not feeling the need to fit into a scene, but not as helpful in challenging you to step your game up as a musician or songwriter, or for finding regular local gigs.

Do you see your music fitting neatly into any musical subgenres like “alt country?”
ROB: People often think we are a country band before they listen to the music just because of our name. Our music does have some Americana qualities to it, but I don’t think we fit into the alt country genre.

What role did busking play in your creative development?
JEREMY: We started out as much more of a folk band, where most of our songs worked in an acoustic arrangement so we could play them when we busked. In fact, many of our songs were arranged primarily with acoustic instruments.

When You’re busking unamplified you have a high noise floor to compete with in the city, so you end up strumming the shit out of your instrument and singing constantly in three-part harmony at the top of your lungs. That influenced our writing and arranging a lot in our early days.

We played mostly upbeat songs with melodies high in our register. Once we started busking less, we slowed things down a little and played more dynamically. We relaxed our verses and left more room to choose our moments with our melodies.

If you had an artistic mission statement, what would it be?
JEREMY: Be a positive force, create a world for the self and the listener, and make the best music you can.

Editorial – A Selection of Goodness 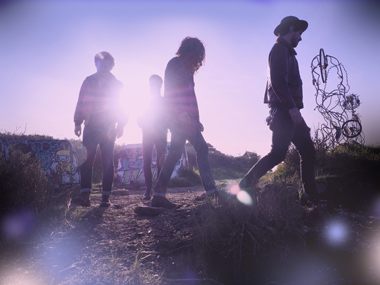