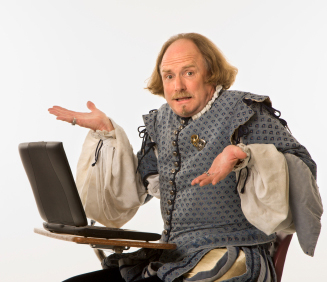 On Thursday we celebrated Shakespeare’s birthday?but if you missed it this year, it’s not too late to join in the festivities! This week we’ll look at some things you might not have known about Shakespeare’s story.

A Night to Remember
Scholars, actors, and directors regularly disagree about Shakespearean interpretation, but usually remain civil. Not so in 1849, when rival actors became embroiled in a dispute so bitter that it turned into a full-blown riot that resulted in 22 deaths. “Mysteries at the Museum” gives the shocking details.

The Original
Green with jealousy? At an icebreaker? Telling knock-knock jokes? These expressions?and more?can all can be traced back to Shakespeare. This mental_floss article explains 21 phrases you may use every day without realizing the origins.

The Man and the Myth
There are plenty of myths surrounding Shakespeare’s life and work?and not all of them are true. This podcast, produced by the Folger Shakespeare Library, sorts them out.

Click On This – TalkTalk – fun links about language and writing