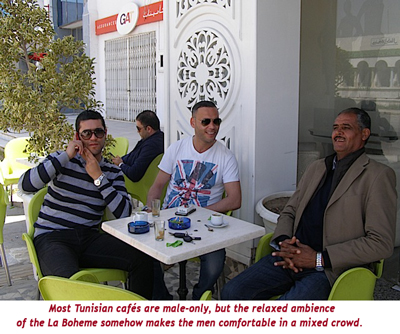 “Hospitality means primarily the creation of free space where the stranger can enter and become a friend instead of an enemy.”

La Boheme Salon de Thé in Manouba has become our second home, our watering hole, our workplace, and our conference centre, the place where we meet friends, celebrate milestones, hammer out goals, resolve disagreements, watch soccer, or just bask in the radiance of a contented clientele and a congenial staff.

Like most cafés here, even the cheaper, all-men’s cafés, the coffee and tea are good and you don’t need to buy more than one to have the privilege of hanging out for hours. There’s a television on the wall running sports or music videos with laughably idealised romantic scenes, but no one pays much attention to it except during the Soccer World Cup, when the place is densely packed with rowdy soccer fans, and then only when Tunisia is playing.

Hot drinks are served in small cups. The main choices are basic, limited to coffees like “direct,” which tastes like instant coffee with a foamy creme on top, espresso, espress Americain (like diluted espresso served in a larger cup). You can also order Arab coffee, Turkish coffee, Italian coffees, or hot chocolate.

If you don’t want caffeine you can buy Lipton herbal teas, sodas, mineral water, lait de poule (“chicken milk,” which is exactly like our “smoothie”), and freshly squeezed orange juice (you can’t buy real fruit juice in the stores, so this is a treat).

For the equivalent of an extra dollar or two you can smoke a hookah, a large standing water pipe stuffed full of chicha, a fruit-flavoured herb with a slightly tranquilizing effect.

Unlike the men’s cafes, which do admittedly sell good cheap coffee, La Boheme is clean, nicely decorated, and welcomes a mixed clientele made up of men, women, and children,

What makes the atmosphere so friendly is that the staff all seem to like each other and the clientele. They like their work even though It’s clearly exhausting, and the logistics of moving chairs and tables for customers as they enter looks like a job and a half (it doesn’t hurt that waitress Ghofrane is a former powerlifting champion). The clientele is respected and respectful. And unlike the men’s cafés, the servers don’t help themselves to your cigarettes without asking first (and then only rarely).

Managers Hichem and Iheb have the kind of friendly, warm personalities that light up the joint, and they never fail to offer returning customers smiles and greetings. As busy as they get, they find time to sit and gab.

Waitresses Ghofrane, Amira, and Fatima whip around with the efficiency of industrial heat pumps. They cater to my need for sugar-free Arab coffee (only because most Arabs add sugar to the coffee while boiling it, and the amount of sugar they add, combined with the intense shot of caffeine, will make you want to excuse yourself to kiss the sky). They sometimes whimsically draw a chocolate syrup heart in my café creme or insert a juice straw twisted into the shape of a heart into my lait de poule.

On my husband’s birthday I snuck a cake over to La Boheme with instructions to surprise my husband with it when we arrived that evening. The girls got into the spirit of things with a delighted zeal, placing the cake on a gorgeous artisanal platter, drizzling it with extra chocolate syrup, and singing “Happy Birthday.”

You can’t buy that kind of loving care.

It would appear that the genial nature of the service here at La Boheme just happened. No staff indoctrination sessions, point reward systems, or pep talks. When asked who set the precedent for La Boheme’s congeniality, night manager Hichem is at a loss. It seems that no one has laid down the law to the staff about how customers should be treated. This is surprising considering that the majority of cafés here provide surly, careless service, as if the servers preferred that the customers stay home.

The Arab nomads of old were obliged to develop a high standard of cordiality toward guests, expected or not; after a long trek through the desert, enduring heat, thirst, hunger, illness, and the threat of confrontations with hostile tribes along the way, the nomad would have craved not only sustenance but a welcoming atmosphere and hosts ready to see to his every need. In the absence of geographically fixed communities, hospitality was a necessary means of sharing goods and information, as well as of maintaining peace between clans.

Tunisians today face many of the same problems that afflicted their ancestors, albeit in altered forms. Even though stationary settlements have supplanted the nomadic lifestyle, the political situation is still uncertain. Bribes are often necessary for dealing with public officials, and some merchants will try to cheat customers who aren’t part of their own clan. Hostile tribes, in the form of hidden cells of religious extremists, can burst out of nowhere to wreak havoc at any moment. Family groups often feel compelled to stick to themselves and to maintain a united front against external threats, a state of affairs that renders civic engagement rare and arduous.

That’s why hospitality is so essential, and why, even today, Tunisian hosts and hostesses knock themselves out, sometimes going without necessities themselves to ensure their guests? comfort. If you are a guest in someone’s home, even for a day, you’ve forged a bond with that person that can’t be broken, a bond that obliges you to seek the good of that household for the rest of your life.

Which is why we’ll always be seeking the good of La Boheme.

The Good Life – Taking a Step