Articles
The Voice
Contrails on a Hot Tin Roof 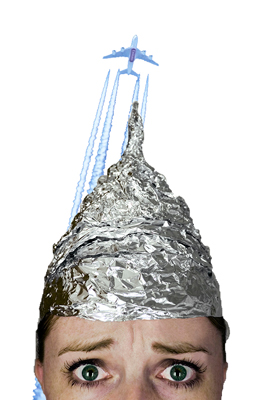 During a pause at my forestry job I gazed skyward and spied a jet with a pluming white contrail flowing out behind it. Against the deep azure backdrop, it had a transcendental quality. This made me think of a fellow I knew who was convinced that planes sprayed mind-control substances into the atmosphere whenever they flew overhead. He believed these contrails to be so capable of overwhelming mental defences that he took the initiative to have his house roofed in tin. A tin roof would protect his children from the harmful rays (or beams or particles or whatever they were). My sociology self remembered W. I Thomas’ famous injunction that “if men define situations as real, they are real in their consequences” (Thomas, online). Outlandish as his beliefs were, this fellow was acting in concrete ways as though sinister brainwash was an imminent possibility. Was he totally out to lunch or did his hills have some eyes of truth after all?

If I met Mr. Tin Roof now I’d try and have a conversation about his beliefs. I think of Blaise Pascal who wrote that “people are generally persuaded more by reasons which they have themselves discovered than by those which have come into the mind of others” (Pascal, online). Our ideas may be under attack from without, but, tin roof or not, we do possess thoughts of our own. And these thoughts are underpinned by a desire for a respectful audience; self esteem is, after all, a socially-produced condition. Fruitful discourse with a conspiracy-theorist, then, must bear in mind that “we need to be able to see something in others that we can identify with, so as not to be confronted by something completely alien, which will define us (always) by this relationship rather than by ourselves.” (Wallace, 2011, online). When we find commonalities with others a healthy dialogue ensues.

And so it was in that brief work break that I figured that I must have something in common with this crackpot-seeming fellow who I’d written off during the time of our acquaintance. At the very least we both had experienced fascination and awe at the sight of plane contrails. It occurred to me that my first-year sociology definition of society was that society is external and coercive to our selves. Media, friends, teachers, family, even our interpretations of our own ’nature’, all are external things that go into making us who we are. In this sense we swim in a soup of mind-control; one not created by sinister lizard people to be sure, but one that is external and coercive nonetheless.

Noam Chomsky and Edward Herman trenchantly summarize actually-existing mind-control in our society in their book and documentary titled ’Manufacturing Consent’. They show that the history of modern media is a history of attempts to control thoughts and ideas to sell consumer products and political ideologies. Some truths are held to be self-evident; these are “what William Evan calls ’normative reference organizations,’ whose requirements and demands the media must accommodate if they are to succeed” (Chomsky and Herman, online). The absence of mind-control waves seems obvious, but in many cases ’truth’ is a far more ambiguous entity.

Mass media suggests interpretations of the world and, as this guidance accumulates in our minds, we start to believe them. Who can forget the run-up to the 2003 Iraq war when news report after news report cried out about ’Weapons of Mass Destruction’ which turned out to be non-existent. That there was so little mass media opposition to this dominant narrative was no accident; certain viewpoints were accepted and certain others were not. Yet internet users readily discovered smaller media websites which stated that there were probably no weapons. These viewpoints were cast aside by the mass media apparatus, however. It was all very Orwellian; all opinions were equal but some were more equal (which is to say acceptable) than the others.

Chomsky and Herman note the elaborate system in place to repress and punish outlier perspectives. In the first place an opinion extraneous to the established hegemonic discourse is automatically downgraded in the mind of listeners by well-placed responses which have been drummed into their (our!) heads. Chomsky and his cohort Herman state that when it comes to the news, and by extension social opinion in general, “the raw material of news must pass through successive filters, leaving only the cleansed residue fit to print. They fix the premises of discourse and interpretation, and the definition of what is newsworthy in the first place, and they explain the basis and operations of what amount to propaganda campaigns.” (Chomsky and Herman, online). Even if lizard aliens and brainwash space programs existed, we’d generally not hear about them. To use Chomsky’s term, too much “flak” would be received by anyone who tried to divulge the truth (Chomsky and Herman, online).

Valid discourse with my tin roofed acquaintance would have to begin by accepting that there exists a kernel of truth within his sense of being externally and coercively affected by the outside world. One might recall that, contending with what seemed like metaphysical mumbo-jumbo and confusion, Karl Marx stated that “with Hegel, the dialectic is standing on its head. It must be turned right side up again, if you would discover the rational kernel within the mystical shell.” (Marx, online). Conspiracy theorists may be akin to philosophers who have fallen into a smoky metaphysical haze out of which some useful truth may yet emerge.

The ’rational kernel’ of confusion and paranoia in the face of a hostile, tentacled, world appears all around us. Everywhere we are assailed by external and coercive ideas. Advertising slyly uses sex to convince us to buy items against our better judgement; if a lascivious model holds a household appliance in the right way we may think we need a new vacuum cleaner. Films project social roles and value judgements which cause us to repress aspects of our authentic selves; men reared on action movies sometimes come to believe that masculinity involves violence. Finally, at the level of thought itself, emotional discontent and existential anguish are, in our society, often reduced to pathologies. There is a pill for every rational disagreement with the dominant norms and values society. Folks who are maladjusted are less often institutionalized but more often prescribed psychotropic drugs to deal with, say, depression arising from a soul-crushing workplace.

In a sense we inhabit a world chalk-full of things that seek to control our hearts and minds. This world of propaganda is explicated by sociology, psychology, philosophy, and anthropology. There are broad, wonderful swathes of education devoted to uncovering the rational and irrational underpinnings of social and mental life. Athabasca University is a great way to access these academic disciplines, no matter one’s age, lifestyle or location. If, in my life travels, I encounter Mr. Tin Roof again, I will be better able to engage in meaningful discourse with him. 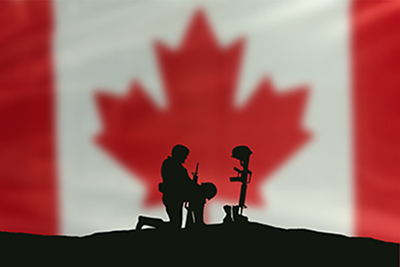 From Where I Sit – Consider