It is rare to find a band that is fun, entertaining, unique, and true to its origins, but with the added bonus of playing face melting rock music. Like a legendary creature finally emerging from its egg after a hundred years, the raw sound of Lipstick will leave you in awe with a sense of great and wondrous things to come.

Formed in Nashville, Lipstick’s four band members are wonderfully quirky. In fact, each member of the band has a great back story that can be found on their website, including the introduction and bio of the band’s mascot Mr. Cool. You can also find the band’s allies, enemies, and a dynamic story (used to provide subtle updates about the band), an element of the band that I absolutely love. Unfortunately, the story hasn’t been updated in a couple of years, so I am hoping that it is something the band intends to work on in the future.

Lipstick Debut Album [Special Edition] is the special edition of the band’s debut album released last year, and this edition includes four bonus tracks and deluxe packaging. Overall, the sound is very raw, like a raw gem before It’s been polished. The music is solid with the typical glam-rock drums, bass, and guitar, but the vocals could use a bit more refinement. Although the vocals are not bad, they just tend to sound more like a teenage garage band than a rock band. But despite that, I really enjoyed the album. The songs are fun, creative, and they are full of laughter and upbeat themes.

Although glam rock is a touch too light for my tastes, the band holds true to the glam sound of the 70s and 80s. Lipstick’s sound reminds me of Meatloaf, Guns & Roses, and The Darkness all rolled into one.

The opening track ?we’re Here to Rock You? starts off with the heavy rock music, which I absolutely loved. However, I did notice that at times the vocals failed to harmonize, and sometimes you could even hear the two distinct voices, which is very distracting.

?I Like the Way I Rock? instantly made me think of the SNL skit where Christopher Walken demands more cowbell! Whether or not that was intentionally done, I absolutely loved this song. The vocals are much tighter, the lyrics are full of confidence, and the sound is loud and gritty. ?I Like the Way I Rock? is a perfect rock song!

If you are having a bad day, or just need a touch of encouragement, ?Alone? will give you the support you need. That typical glam sound is accompanied by uplifting lyrics that I find heartening, to the point that, on the days I don’t feel like I can tackle my day, this song gets me moving.

I could easily go on about every song on this album, especially tracks like ?The Conan Song?, ?Merle?, and ?Tonight? which all showcase the best of the band member’s talents. But the last song that I want to draw attention to is one of the four bonus tracks ?Illium?. The music is lighthearted, and the lyrics are delightfully whimsical. Full of science fiction and fantasy references, combined with high school woes, I found this song to be absolutely addictive and is guaranteed to put a smile on your face.

Lipstick Debut Album [Special Edition] is a wonderful tribute to the glam rock bands of old and is worth checking out. The special edition album is available on June 3rd, but the original edition is now available on their website for purchase.

In Conversation with The Lipstick Junkies 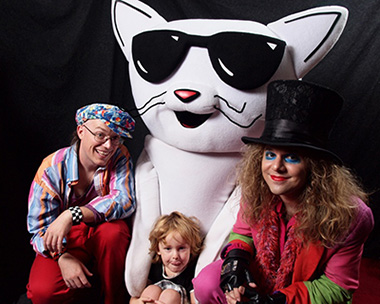 A Time for Goodwill to All