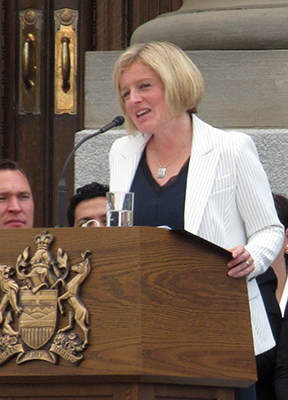 The lawns, the sidewalks, the wading pools, even the trees on the Alberta Legislature Grounds were filled with people. Sunday, May 24th, 2015 marked the first change of government in Alberta in forty-four years, and the public turned out in droves to witness the first government swearing-in ceremony to which they had been very deliberately invited.

The ceremony took place on the main steps of the legislature. One sheriff, providing security support on the west side of the grounds, estimated that there were “about twenty thousand people” on site, adding that he and his colleagues had been “told to plan for between seventeen and twenty-five thousand people to attend.”

Chief Justice Catherine Fraser administered the oath of office to newly elected premier Rachel Notley, leader of Alberta’s New Democratic Party. Even Fraser seemed excited by the mood at the Legislature, and paused between Notley’s swearing-in and the introduction of cabinet members to say “this isn’t in the script, but you can now congratulate her, She’s officially Premier!” The crowd cheered loudly.

Notley announced a cabinet of just twelve ministers, including herself, a contrast to predecessor Jim Prentice’s cabinet of twenty. “We have an efficient and lean cabinet to get down to work and to deliver results,” she said. “This is a cabinet built to work and to get the job done.” Given that the NDP pledged additional funding and support for post-secondary institutions and students in their election platform, some of the new cabinet’s work can be expected to be in the area of Advanced Education.

Lori Sigurdson, MLA for Edmonton-Riverview, was announced by Notley as Minister of Innovation and Advanced Education. In this role, she will be responsible for the department that “supports accessible, affordable and quality advanced learning opportunities for all Albertans” and “funds public post-secondary institutions in Alberta” (as well as devising the formula by which individual institutions receive funding).

After Sigurdson and her colleagues undertook their respective oaths of office, Fraser invited Notley to bring remarks. The crowd chanted “Rachel! Rachel! Rachel!” over and over again. “Welcome to the first day of Alberta’s new government,” Notley said. “Today we open a new chapter in the story of Alberta.”

Notley’s remarks highlighted some of the “great things” that have already been accomplished through the determination of Albertans, including the development of “universities and colleges that attract the brightest minds and help our students reach their fullest potential.” Notley said she is “filled with a deep sense of confidence in what that future will bring” and humbled by voters? trust and “by our amazing potential.”

At the close of the ceremony, Notley led her cabinet and caucus down the Legislature steps “to meet those in attendance.” The crowd surged forward as supporters both young and old sought to shake her hand, congratulate her, and pose for photographs. Certainly the attendees present joined Notley in her belief that “it is springtime in Alberta, and a fresh wind is blowing.”