Columns
The Voice
In Conversation with No Dry County, Part I

No Dry County is a Texan indie band revelling in rootsy Americana, folk, and classic rock, expressed beautifully in tight harmonies and with a passionate stage presence. Their first full-length album, The Night Before, was just released this March. Recently the band’s vocalist, Trent Langford, took the time to talk to Wanda Waterman about the songwriting process, vocal harmony, and a game called “Rambo.”

You write songs that sound so familiar and yet so original at the same time. Do they just happen? Or does songwriting require a lot of meticulous work for you?
Over the years I’ve tried to be more deliberate about writing on a consistent basis, whether it be “inspired” or just putting pen to paper and writing ten songs that may only yield one good tune. A number of the songs from this release are influenced by actual experiences and were written in the van on our last tour, when we were supporting To Whom It May Concern, but some of my favorites are tunes like “Till The Wheels Fall Off” and “Crazed Young Love,” which we sat down and wrote from the ground up as a band.

What was your most beneficial educational experience? What or who in your training had the most? and best? influence on you, as a musician, a composer, and a human being?
My musical upbringing was largely influenced by my father, who always sang and played guitar, and my mother, who plays and teaches piano. She taught me theory and gave me an ear for many different styles of music. Likewise, I was always involved singing acapella gospel at our church up through high school and attended “singing schools” led by directors like Dr. Darrell Bledsoe and Brett Farr.

My first attempts at writing began in high school. I was heavily influenced by Paul Simon, Robert Earl Keen, Ryan Adams, and the like. It’s hard to identify a more formative influence in my life, aside from my parents. They always put the wellbeing of my sisters and myself ahead of their own, and spent their lives serving others.

Even more than the various life lessons Dad gave me, or my mother’s practical advice about handling money, their example of caring for the people around them stands out. Not a week goes by that they aren’t visiting someone in the hospital, taking food to someone who just lost a loved one, or working to better the plight of the homeless around town. Those actions stick with me more than anything.

What was the most mesmerizing musical experience of your life?
ZZ Top. Live. No explanation needed.

What’s your favorite instrument to play and why?
I’m a bit rusty, and some broken fingers slow me down, but I still enjoy sitting down and playing a piece on the piano. I’m a dreadfully average rhythm guitar player, so playing an instrument that I can at least remember being serviceable at is a treat.

How did you all find each other?
Most of us were playing in different projects within the Lubbock scene in college. We had quite the revolving door in regards to musicians for about three years. Matt Newsom (drums) joined in 2011, followed by Dub Wood (bass) in 2012, and Jonathan Dunlap (guitar) moved to Lubbock and joined the band in 2013. There’ve been a number of different incarnations since Monte Ebeling started the band in 2008 but this current lineup has been together for a little over two years, with the addition of Bristen Phillips (guitar, axillary) a few months ago.

How did you learn to harmonize so nicely?
I’ve always been a sucker for good three and four part harmonies, stemming from my gospel music upbringing, so that was something we leaned on in our early stages and it kind of stuck. We made it a point to highlight that aspect on the record and still get a little “harmony happy” at times but It’s definitely a staple of the band.

Has anything funny or strange ever happened to you in the recording studio or on the stage?
We once had a fairly primitive game called “Rambo” in which you could slap just about anyone (provided the rules were explained) after yelling “Rambo!” The game commenced one night after a show with Jason Boland and Six Market Blvd and, after everyone had received a fair amount of “love taps”, one musician (who should remain nameless) named Ben Hussey proceeded to smack a moving tour bus whose driver had not been adequately informed of the game and It’s rules.

This was met with a rousing round of applause, one broken finger, and a red-faced tour manager. Maybe a “had to be there” story, and while we weren’t on stage, it remains one of our more infamous moments. 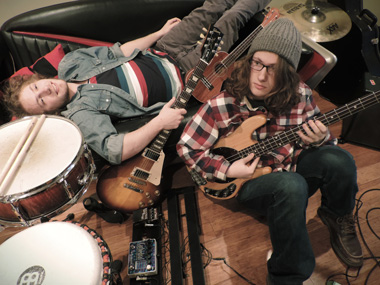 In Conversation With . . . Dustin Dopsa of Final Thought