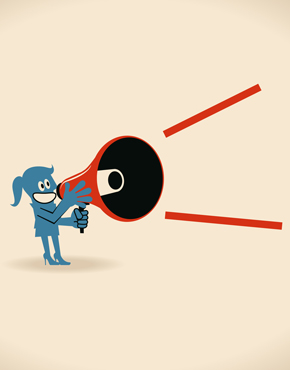 Maryam Adham is an AU student living in Calgary. Originally from Oregon, Maryam moved to Montreal after getting married, and eventually moved to Alberta. Maryam is working on a double major in Psychology and English.

Maryam was recently interviewed by The Voice Magazine about school, psychology, and procrastination.

Describe the path that led you to AU.
I was originally at Oregon State University. With getting married, moving to Canada, and having two kids, my studies got put on hold. When we moved to Alberta, I contemplated different options. Our kids are ages 3 and 4, and it just didn’t seem the right time for in-person studies. AU seemed like the right choice.

What do you do like to do when You’re not studying?
I do tutoring on the weekends. My family was originally from Egypt, and I’m fluent in Arabic. I tutor some Arabic-speaking students, and also some in English.

I’m an avid baker and, although I have less time for that now, I still make cakes. I’m also a fitness junkie so I spend time at the gym. And I like to spend time having coffee with my friends.

What happens after you finish your education?
My goal is to get my Masters of Counselling, so I’ll be continuing my studies for a while.

Who in your life had the greatest influence on your desire to learn?
Probably my Mom. She had a PhD in Nursing. Education was a big thing for her, and she was really supportive in encouraging us to reach our goals.

What famous person, past or present, would you like to have lunch with, and why?
When someone is famous, it doesn’t automatically make them interesting, although they can be. I just think that there are regular people that, even though they aren’t some literary great or something like that, have led interesting lives and accomplished great things.

Describe your experience with online learning so far. What do you like? Dislike?
I think It’s harder to do online. There’s no face-to-face interaction. Because I began my studies at Oregon State University, I’ve experienced the difference between classroom and online. Online allows more freedom, which is great. But sometimes things seem a bit disorganized. For example, in one course parts of the course materials were updated but not others, and references to certain pages were no longer valid. And I find the course tutor and instructor set-up a bit confusing: who’s in charge? The other problem with online is that It’s often limited to one mode of delivery. Students have different learning styles, like auditory or tactile, for example, and just providing written course materials doesn’t provide optimal instruction for a variety of students.

Was there ever a point when you wavered about your education?
Definitely. I always wanted to go far with my education. But when I was living in Quebec as a permanent resident, tuition was too expensive. Then I had kids and had to decide whether it was better to stay home with them or go back to school.

What’s your most memorable AU course so far, and why?
One course I found interesting was a Psychology course called Introduction to Counselling, PSYC 388. It offered practical applications rather than just the theory that other courses had. This course really showed me the career I want. It’s a basic introduction to counselling, but it showed me what to expect. I found it a bit more hands-on than many courses.

Describe the proudest moment of your life.
I think there have been a series of small proud moments rather than one defining moment. It’s tempting to look for the “one”, like the birth of my children, but life is more of an accumulation of such moments.

What have you given up to go to AU that you regret the most?
Just time. A lot of time that could be used in other ways. I miss out on doing things with my kids and my husband. And I miss out on community events. I’m taking a full-time course load, so that doesn’t leave much time.

If you were the new president of AU, what would be your first project?
My first project would be to get rid of the online texts, or at least give students the option of having a hard copy text. For me, there’s nothing worse than reading an online text?it gives me a huge headache. I think online courses are hard enough; having e-texts just adds another layer of difficulty.

If you could wake up tomorrow with a “superpower,” which one would you choose?
I would choose to have the power to not procrastinate. If I could do that, I’d really be super-human! Seriously, I guess I’d choose the ability to fly. It would be great to be able to go everywhere, easily.

If you were trapped on an island, what 3 things would you bring?
Cheesecake, a computer, and sunblock.

Describe one thing that distinguishes you from most other people.
I feel I’m a pretty open-minded person. I like to experience new things and new people.

What is the most valuable lesson you have learned in life?
It’s that you need to be content with the choices you make in life. Not everything is going to work out the way you expected, but it usually works out the way it was meant to. You have to look for the positives.

How do you find communications with your course tutors?
For the most part, there is no communication. I generally try to work through most things myself. I had one tutor, though, who reached out to me half way through a course to see how I was doing. That was the first time I’d ever had a tutor contact me first.

Where has life taken you so far?
I haven’t been outside of North America yet. I was born in Oregon and I’ve been across much of the States. In Canada I’ve been to Quebec, where I lived for several years, and Ontario and Alberta. And soon I plan to go to BC. Sometime, I’d like to travel overseas to places like Turkey and Spain. I like places where there’s a combination of history, beauty, and good food.

What (non-AU) book are you reading now?
I’m not reading any non-AU books right now. we’re moving at the end of the month, and there’s just no time for reading. But my husband is reading an interesting book that I’d like to read: Essentialism: The Disciplined Pursuit of Less, by Greg McKeown.