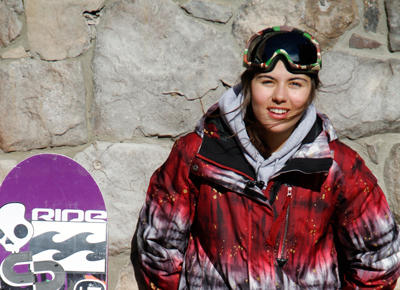 Natalie Allport is an AU student living in Ottawa. She is a competitive Slopestyle Snowboarder with her eyes on the 2018 Olympics. You can check out her website at http://www.natalieallport.ca. Natalie is in AU’s Business Management program.

There was still snow on the slopes in April when Natalie was interviewed via e-mail by The Voice Magazine about school, snowboarding, and warm summer nights.

Whereabouts do you live? And where are you from originally?
I live in Ottawa, Canada and was raised here although I was born on the west coast, in Vancouver.

For those of us who live far from the slopes, please describe what Slopestyle Snowboarding is.
Slopestyle snowboarding is a new Olympic sport that made its debut at the 2014 Olympics. It involves doing your best tricks on a course of jumps and rail/sliding obstacles. It’s a judged sport, where you are judged based on difficulty, style, execution, amplitude, and creativity.

How did you get into snowboarding?
I was always an athlete in a multitude of sports, mainly hockey, but looking to try out a new sport I traded in my rental skis for a board one day at a local mountain. I was awful at first, but I think That’s why I enjoyed it so much?it was a challenge.

Describe what your training regimen entails.
A typical day in the season involves on-snow training?working on jump and rail tricks, a couple hours in the gym afterward, followed by mobility and recovery.

Is the 2018 Olympics your ultimate snowboarding goal, or do you have aspirations after that?
I’m still trying to figure that all out! 2018 is still a long way away.

How do you balance training, studies, and work?
It definitely is hard, sometimes, but creating a schedule well in advance is key. Before the season begins I usually have a good idea of what my training and competing schedule will be, and then I can create a schedule for completing my studies and work around that guideline. Lots of things come up like hospital trips, emergencies, and last minute training activities, which can throw off the schedule, but I’m lucky in that I’ve learnt how to get work done fairly quickly when I need to.

Which program are you in at AU? Describe the path that led you there.
I’m in the Business Management program at AU. I actually went to college first, and then transferred my courses over a year ago. I decided to go to college before university because I knew they would be more lenient with my competition schedule. However, when I discovered Athabasca U I realized I could get a university-level education and actually complete more courses while competing than I was previously doing at college. The plan either way was to go to university afterward, so this made the process that much faster.

What do you do like to do in your leisure time?
I like cooking and watching movies! By cooking, I mean eating.

What happens after you finish your education?
After I finish my education I hope I will have the means and direction to be able to pursue a path in entrepreneurship. Since I was a little kid I’ve always had a pretty good idea of what I want to do in business, but I’m still figuring out the specifics.

What famous person, past or present, would you like to have lunch with, and why?
That’s a tough one! I would nerd out over having lunch with Oprah or Warren Buffet as I’m sure they could teach me so much about business and would have some great connections! On the other hand I have a slight obsession with Lana Del Rey so I would love to talk with her.

Describe your experience with online learning so far.
It’s been good! Online school has taught me a lot about time management and has allowed me to study while I also compete. You really have to be self-motivated, which mostly I am, however, like everyone, I have my days where I really can’t bring myself to focus, especially after a long day on the mountain.

Have you had a time when you wavered about your education?
There have been many times when I’ve wondered if I could handle managing my education and training. In fact, I took one winter off from my studies. I think there are days when everyone wavers about all the big things in their lives but ultimately you decide what’s important and what’s worth your time and I’m glad I decided education was one of those things!

What’s your most memorable AU course so far, and why?
Actually so far I’ve been taking my least favourite subjects to get them out of the way before I take subjects that are more in my direction of interest. I’m excited to take some elective courses?they’ll be more fun.

Describe the proudest moment (or greatest accomplishment) in your life.
I think athletically it was probably winning my first contest, which, unknowingly, kick-started this crazy journey I’ve had with snowboarding. Personally, though, no one single moment really stands out, but lately I’ve been proud of the big and small decisions I’ve made on a daily basis which leave me with a feeling of accomplishment for what I’ve done so far in my life.

Have you given up anything to go to AU? Was it worth it?
I’ve given up a lot of free time. When training on the mountain and in the gym there is not much time for anything else. Some nights It’s a real rush to cook dinner and have time to work on school. I think It’s definitely worth it though as I’m able to work toward what I want to do and to keep learning while also pursuing sport.

If you were the new president of AU, what would be your first project?
Making the school better known to athletes like myself! I wish I had known about AU right out of high school when I first began my snowboard career. I think it would be great for AU to partner with national sports organizations and teams to encourage more athletes to pursue education.

Describe your favourite sound.
The ocean is hard to beat, but I think a warm summer night at my cottage with crickets and frogs is a great sound.

If you were trapped on a tropical island, what 3 things would you bring?
Sunscreen, water, and a surfboard (it could double as a life raft.)

Describe one thing that distinguishes you from most other people.
It sounds funny, but probably my crazy belief that nothing is impossible. I think a lot of people are held back by the thought that they can’t do something or they simply weren’t meant to be something, but I strongly believe that if you set your mind to something you can accomplish it no matter what it is. It doesn’t matter what your circumstances are, if you want to be a pro athlete, you can do it. A Fortune 500 CEO, you can do it. It all depends on how much you want to work for it and how far you are willing to go.

What do you think about e-texts?
I think they’re great! I love a good hardcover novel, but carrying around a textbook in my already overweight snowboard travel bag is not very convenient.

How do you find communications with your course tutors?
I find they actually reach out to me more often than I reach out to them, which is great because I always know they will be there when I need them.

Where has life taken you so far?
I’ve been very lucky to have many amazing experiences through both snowboarding and sport and through personal travels. I’ve been to Junior World Championships twice, once in Spain and once in Turkey, and both made for unforgettable trips. I’ve been to some cute mountain towns and some not so great places as well. I went to New York City last fall and totally fell in love with the city.

What (non-AU) book are you reading now?
I’ve been reading Start With Why by Simon Sinek for a while now. I keep stopping it, starting other books, and then coming back to it.

One final snowboard question: What’s the last thought in your head before you launch yourself down the slope?
“Take a deep breath, have fun, you got this.” I try to repeat that in my head every time I drop in.

Editorial – On the Bubble