Columns
The Voice
From Where I Sit – The Challenge

Despite having all sorts of (better?) ways of making notes, I persist with using scraps of paper and a pen. It may not have served me particularly well as technology has advanced, but old habits die hard. I am trying. Among the notations on my phone at this moment are the combination to our floor safe, where I’ve hidden my mom’s safety deposit box key, the name of a favourite MAC lipstick, the Venza license plate number, and the contribution room on my TFSA. There are others that might as well be written in Greek for all they mean to me now.

(Over the years I’ve flirted with the technique most writers use: carrying a small notebook at all times to capture flashes of insight and observation before they vaporize. Maybe It’s time to start again.)

The inability to decode what, when, and why I scribbled a specific note extends to my paper ones as well. Sometimes I can’t even read my own writing. And so it is with one That’s been floating around my desk for the last few weeks.

I read an interview with Taylor Schilling (Orange is the New Black) in one of the magazines I receive. I copied a line that grabbed me: “That bone-deep acceptance of your life?whatever it looks like?is when doors start to open and an opportunity presents itself.”

It’s a good line. One that has meaning even as it stands alone. How much better would my understanding be if I had ripped out the whole article and had the context for her remarks? Lesson learned.

I saved the line because it spoke to me. We can probably count on one hand those who have fully (and easily) come to self-acceptance. But for most of us It’s a lifelong struggle. It begins at puberty and persists, unabated, well into one’s twilight years. We all know those feisty old broads who shoot from the lip and say all those things the rest of us are filtering. They’ve grabbed life with both hands. Critics and self-doubt be damned.

In my own case, I’ve come to accept that I live in the country near a village of fewer than four hundred people and that isn’t likely to change as long as we farm. I have learned that I don’t do well for long in the nine to five ?working for the man? scenario. I’ve accepted that I don’t have the resume showing long, uninterrupted chunks of devotion to specific employers. I do best when I’m working on specific projects in which I assume the responsibility and the reward of its outcome.

That bone-deep acceptance of my life led me to propose and then implement Babas & Borshch Ukrainian Festival, now entering its third year. Work that is challenging but satisfying. An opportunity to do something for my greater community. A chance to draw on all my skills and talents. Recognizing the open door and having the courage to walk through it is the challenge, from where I sit.

Top Five Organizational Tools Every Student Should Have 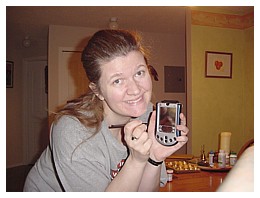 Addicted to the Palm