Articles
The Voice
Keep Calm and Study On 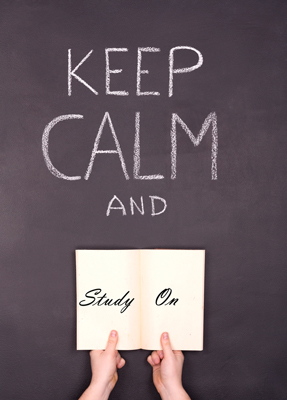 As an AU student who hopes one day to make the journey to Athabasca to collect her degree, I’m concerned with recent reports regarding AU’s long-term viability. Media reports predicting the demise of AU, or a merge with another institution, seem to crop up annually, followed by some water-on-the-fire response by the university. This year’s crop of doom-and-gloom seems more virulent than usual, causing me to pause and ponder: Is my AU degree safe?

Bethany Tyne’s article in the June 19, 2015 issue of The Voice Magazine, “Insolvency, Incompetence, and Other Indiscretions”, went a long way toward explaining how AU arrived at its current state, and outlined some of the ways forward currently under consideration. I’m in Ontario, and somewhat disadvantaged when it comes to knowing what’s going on in Alberta. (Truly, I wouldn’t have known there was an election in Alberta this year except for the coverage in The Voice; Ontario media didn’t pick up the story until the final days when an NDP victory seemed imminent.)

Am I worried? Sure. Will the situation at AU change what I’m doing? Not likely. I’m about half-way through a degree program at AU. Given my pace of study, I’ve got at least another three years to go. If I bail out now, my time and money already invested won’t count for much. What’s more, if I bail out now, I’m becoming part of the problem. While it’s natural for students to be concerned and mull over their options, each student who withdraws from AU reduces AU’s revenue and increases AU’s problems. I think a reality check is needed here: it seems doubtful that AU will close down.

University closures in Canada are a rare occurrence. The post-secondary education landscape is continuously adjusting to current needs. Over the past 150 years in Canada, a number of colleges have closed or merged to become universities. Universities, however, tend to grow rather than whither and I could only find one instance of a university closing down (after a bumpy history) and a handful of mergers.

The province of Alberta is unlikely to let one of its universities close. A provincial government that allows a university to founder would be committing political suicide. The current NDP government in Alberta seems more education-friendly than the previous government. If the NDP wishes to have a chance of a second term in Alberta, they really can’t afford to put a foot wrong. Losing a world-renowned institution, one which is best-placed to ride the wave of online education technology, would be an epic misstep.

Merging AU with another university has been suggested (or threatened) as a potential course of action. While the merger option is unpalatable, it wouldn’t be the end of my world. I’d like to get my degree from AU. Call it loyalty or stubbornness, but I began my journey with AU and I’d like to finish my journey with?and hopefully at?Athabasca. However, if the oft-rumoured merger of AU with the University of Alberta ever happened, at least my degree would be safe.

I don’t have the answers to AU’s problems. It seems the solutions most likely reside in the political arena. AU receives provincial funding based only on its Alberta students, and it’s clear that the current funding model is not a good fit for a university that draws its large student base from across Canada and around the world. A non-traditional funding model seems more appropriate for a non-traditional university.

Through the turmoil, my plan is to Keep Calm and Study On. Not just because I think it’s worth the risk, but also because I don’t have much choice. I need the flexibility and convenience of online study. I live in a rural area and the nearest university is more than an hour’s drive away. Right now, AU is my best option for completing my degree. I’m sticking with you, AU. Don’t let me down.

Editorial – The Dark Lining on the Silver Cloud