Features
The Voice
The Cost of Incompetence? 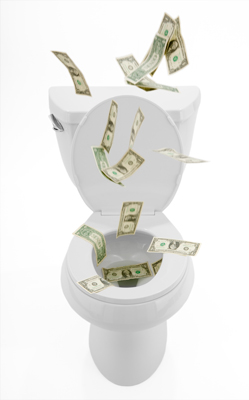 I know many of you won’t be reading this, the sun is shining, the beaches are full, and the last thing most of us are thinking about is Athabasca’s Student Union. Yet, for those of us involved in the University community, recent happenings have been hard to miss, both the recent AGM and the coming election (or by-election). A recent post on the (unofficial) Athabasca University Facebook group got me thinking. I won’t post the full comment, just a fact which really stood out to me:

A by-election at this stage involves the same procedure and costs as a general election. If a by-election is held now, a General Election would have to follow in a few months, doubling the expense and the effort of staff.

The post had risen to the top of the page with 11 likes, on a page where posts are lucky to receive 3 or 4 likes. Obviously students care about the cost of both the AGM and the election process, but what are the costs, exactly? And what should they be? It’s all a bit foreign for a communications student like myself but I was determined to find out.

For myself the whole AGM debacle started with AUSU’s attempt to shut down The Voice. This was a major issue for many students and led to people looking further into AUSU. When students looked more closely at council’s behaviour, some didn’t like what they saw. It brought to light bylaw violations, and unusual accounting that caused students to pass a motion asking for certain councillors to be removed from the union (all of whom have stepped down except for AUSU President, Shawna Wasylyshyn) and a motion asking for an in depth audit of AUSU finances.

While little progress has been made on acting on those motions, they have managed to cause quite the legal bill. In an email to The Voice writer Barbara Lehtiniemi, Corrina Green outlined some of those legal fees which include:

“? it brings the total for Legal Fees this year to $10,292.12,” wrote Corrina, “Sadly, we have not received our invoice from Shores Jardine for June yet, which I suspect will be here any day and will be no less than the last couple of months from them. AUSU asked Fiona for a full legal opinion on the matters brought forward at the AGM and that has not been included in any of the invoices yet.”

AUSU originally budgeted $3000 for legal fees for this fiscal year, but it looks like they’re well on their way to reaching the $15,000 mark. That’s enough money to provide a bursary for 20 students (students? top priority according to a recent AUSU survey.) However, the costs don’t stop there.

A report released by the Finance Committee on July 8th also mentioned “? new Executive with little governance knowledge” as a contributing factor to the costs. This likely refers to Shawna Wasylyshyn who is responsible for chairing meetings but has had difficulty doing so. It was for that same reason that a ?parliamentarian? (unregistered) was hired for the AGM at a price of $200.

The $200 price tag now seems like a deal as a report released July 7th by AUSU says they’re now considering hiring a parliamentarian for regular assistance. The two candidates being considered charge $210/hr and $350/hr. In addition to a parliamentarian to help executives with governance, AUSU is considering a 3-day governance class at a cost of around $3000 for Shawna Wasylyshyn, at the suggestion of Innovation Alberta. However, VP Finance, Corrina Green commented that no such course has yet been approved.

When it comes to running an election, past councils have used an in-house voting system through the AUSU website, it was free. The current council has decided to use an external service called Simply Voting. This service was used to vote on motions put forth at the AGM for a cost of $200USD ($254 CAD). If there’s a by-election, the same system will have to be used twice, once for the by-election and once for the general election a few months from now. According to Simply Voting’s pricing calculator (assuming about 27,000 eligible voters in any given month) each election should cost $3,730 USD ($4,742 CAD). Bringing the total cost of using Simply Voting to $9,684.

In addition to the voting service AUSU will need to hire a CRO to manage the election process. $1,000 has been set aside for the CRO and having two elections will mean paying that amount twice.

When asked to comment on the situation VP of Finance, Corrina Green responded:

“Bottom line, the remaining councillors that are refusing to step down are going to spend almost $6000 (this does not take into account the demands on staff and their time) to hold a by-election, and in 7 months they will spend it again to hold a general election. It is unsettling that they have that much disregard for fiscal responsibility as councillors.”

Here’s Your Chance to Get Involved! AUSU Elections 2004

Here’s Your Chance to Get Involved! AUSU Elections 2004