Columns
The Voice
In Conversation with Vinyette, Part I 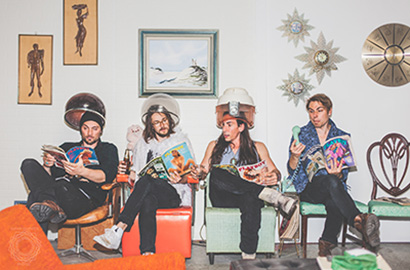 Vinyette is an indie rock quartet based in New York City. Their recent single, “Charlie,” is a hard-driving protest song about love gone bad, a song (reminiscent of the grunge exuberance of the Red Hot Chili Peppers) that’s also a paean of praise to an American gypsy girl, named Charlie, who dances to her own drummer. Last year the band members quit their jobs for a four month tour that took them from California to Europe (they opened for Marky Ramone and Andrew W.K. in the Czech Republic). Recently lead singer Nathan Frye and drummer Jonathan Crowley took the time to answer Wanda Waterman’s questions about their musical backgrounds

What role did music play in your childhood? And how did this lead to a preference for grunge?
NATHAN FRYE: I’m proud to say that all the band mates have healthy artistic, intellectual, and musical backgrounds. My father played in classic rock-styled bands as a singer and rhythm guitarist. I have a large family, many of which sing in some fashion. If I may name drop a moment, my cousin Rainey Qualley was just named one of Rolling Stone’s top 10 up and coming country singers of 2015.

Lots of musicians as well in my family. My stepfather is a jazz guitarist who graduated from Berklee College of Music.

It all started for me because my mother loves to sing along with her record player. She played artists like the Beatles, Steely Dan, and Joni Mitchell. Going to live concerts is my favorite way of connecting with others. It feels spiritual; even just listening to music is a release that nurtures the soul. I think it just happens?our whole band likes making music that may (or may not) fit in the grunge genre. We’re just gonna play what we love.

JONATHAN CROWLEY: I grew up listening to Clapton and Little Feat via my dad who, like me, played the trumpet and drums. My uncle was a composer, and both my grandmothers were singers and pianists. I still listen to the classical music that reminds me of them.

I think we all turned to grunge at some point because it had so much power behind it. The same way the past generations turned to punk, grunge seemed to be our generation’s version of that. Just something that smacked you in the face and did what it wanted.

What or who in your musical training had the most?and best?influence on you, as a musician, a composer, and a human being?
NATHAN FRYE: My biggest influence was undeniably Jim Morrison. He attended the same high school I did, so his writings and the music of the Doors were my earliest and most positive influences musically. I dreamed of doing what Jim did, but I wanted to survive it. Jim was really good at riling people up and manipulating crowds. I think he yearned for more introspection out of society in his time, so he strived to inspire such.
I’m interested in the betterment of myself and the world as we know it. I think inspiring introspection is a great step in the right direction. That urge for positivity is more of an influence from my mother.

What was the most mesmerizing musical experience of your life?
NATHAN FRYE: I can’t name just one, which makes me feel lucky. Most of those experiences have occurred with my band in rehearsal. There’s nothing like cutting your way into the thick of that bramble and discovering the juiciest berries.

JONATHAN CROWLEY: I remember listening to one of our early rehearsals, when we were playing nine-minute pieces that never repeated any sections. It just struck me that our music was a key. To open any door we wanted. I’ve had so many epiphanies through music. Most are difficult to put into words. Hopefully they come out in our music.

Has anything funny or bizarre ever happened to the band?
JONATHAN CROWLEY: Oh man, I don’t know where to begin. We laugh a hell of a lot on the road. We’re just kids out there, enjoying everything we can. Bizarre is our normal.

In Conversation with Vinyette, Part II