Columns
The Voice
Music Review – Before the Flood 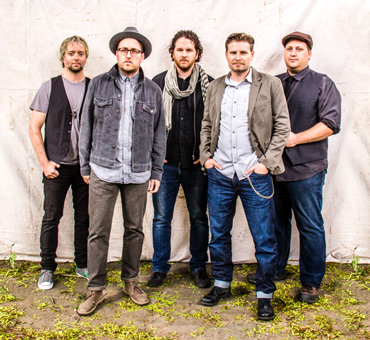 Band: Before the Flood
Album: Hole in the Sky

Sometimes I come across a band that writes such astounding lyrics that I can’t help but love their music. Before the Flood is capable of writing lyrics that not only captivate listeners, but come from deep in the heart as the stories they write are universally human. As an added bonus, these songs are set to the most beautiful music that blurs the lines between traditional music genres.

Formed in 2005 in Southern Ontario, Hole in the Sky is Before the Flood’s second album. Often compared to bands like Wilco or The Shins, I find that they also remind me of The Trews, The Tragically Hip, Blue Rodeo, and even The Smashing Pumpkins. Given the bands that they remind me of, I find that there is something very Canadian about their sound, creating a familiar warm and comforting feeling that I find often comes from listening to Canadian musicians. What I mean by this is that I find Canadian musicians often create music that is as at home in a kitchen party as it is in a large stadium or on an album. Personally, this is a quality that I love about Canadian music and musicians.

Hole in the Sky is a magnificently arranged album. With each track being so incredibly unique I truly believe that there is a song on this album for everyone. Each song on their latest album is distinct and unique, and at times their music is distinctly folk or country, other times rock is the dominant sound, then sometimes jazz elements are added creating a unique exotic feeling. That being said, I found it hard to really like every track on this album, and I would recommend those interested in checking them out to preview each song before investing in the entire album.

The two songs that I really enjoyed were ?Your Only Day? and ?An Island?. ?Your Only Day? has slightly darker lyrics, but the music that they are set to is what captivates me. The singing is echoey and faded, creating an ethereal quality to the sound. It first creates images of lazy waves, beaches, and surfing, then, as the song reaches the chorus, the inclusion of the violin gives the music a stronger, earthy vibe, and an image of a wide-swept cottage on the edge of that beach emerges with dark clouds closing in overhead. The ability of the musicians to use the lyrics and tones of the song to create such a strong feeling is amazing.

?An Island? starts off light and lazy and I expected the vocals to be similar to that in ?Your Only Day?. Instead, I was startled to hear that the singing is slightly heavier?with only a subtle echo effect. As an added treat, the female back-up vocals that join in for the chorus create a dimension to the song that I don’t feel is in the other tracks on this album. The strong but muted guitar and drums feel like they can carry the heart of the listener along on the sound to someplace magical, a feeling that is reinforced by the even lighter, and almost magical, tones of the song’s conclusion. ?An Island? makes me think that if music could ever capture the essence of flying on the wind, it would sound like this song.

If you are interested in checking out Hole in the Sky, the album can be previewed and downloaded on iTunes.